It is probably not new to you what kettlebells are and maybe you have even picked one up and fooled around with some of the exercises. This odd object is actually a great tool for every athlete and it is probably worth your while to learn how to do a proper kettlebell swing and add it into your training programs to enhance your athletic performance.

Many athletes feel that the best way to develop power for sports is through the Olympic lifts (clean and snatch). No doubt these exercises are great for power generation but they may not be better than the kettlebell swing when it comes to athletic power development and training other energy systems.

The kettlebell swing has several advantages over Olympic lifts when it comes to training for sports because of their target of the posterior chain (primarily hamstring and hip muscle groups) through hip extension for power production and conditioning. 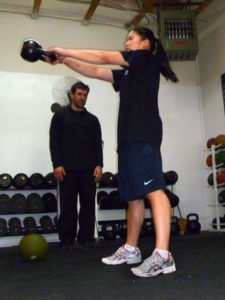 Olympic lifts train the all out one max effort movement. This can be the start of a sprint, or getting off the line in football and other limited examples of maximal effort needed. Most sports, however, are not frequently subjected to these types of efforts. Sports like soccer and basketball consist of a series of repeated sprints and stops of sub-maximal force production; not an all-or- nothing explosive movement.

The kettlebell swing can train just those submaximal repeated efforts because the kettlebell weight used is usually far below what you would use for an Olympic lift. This allows for multiple repetition sets that can simulate the stop and go movement in most sports. Performing sets of 10-15 repetitions of a weight 1/4-1/2 your body weight is perfect for training the hamstrings for the repeated stress that is common in competition.

Unlike Olympic lifts you can also use a lighter kettlebell and perform longer sets of swings to increase muscular endurance and cardiovascular conditioning. One might suggest that running long distances does the same thing and they would not be too far off the mark; however the kettlebell offers a few distinct advantages over distance running.

First off, distance running further adds to what athletes already do which is run. Running conditioning is crucial for many sports but when an athlete gets to an appropriate running level adding more may prove to be too much and increase the potential for overuse injuries. Kettlebell swings for longer periods of time can train the cardiovascular system without adding more joint stress that running produces because there is no pouncing of the pavement like with running.

Kettlebell swing training can also have the same cardiovascular training effect in less than half the time as running. With running you are moving your body weigh whereas with kettlebells you are moving isolated weight which will make you feel fatigued much faster and get the same workout as if you ran for twice the duration. 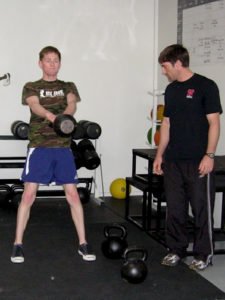 In terms of learning how to perform the exercises, Olympic lifts take much longer to learn the technique when compared to the kettlebell swing. With the Olympic lifts being so technically challenging not only does it take time away from the training session, it can also lead to more injuries if not performed correctly. Kettlebell swings are generally easy to learn and any corrections necessary can be quickly fixed. Athletes of all ages and ability levels can learn this movement quickly and plug them into their training program immediately.

To Perform the Kettlebell 2-Arm Swing:

Adding some kettlebell swings into your program is an easy thing to learn and the rewards will pay off nicely in your athletic development.

If you need more information about the kettlebell swing check out the video below: