Having been a trainer for over ten years I always remind myself that I must never relax and get too comfortable with my profession and always strive to get better.  I realize that the world of strength and conditioning is not like software and social media where the product is evolving and changing at a rapid rate; however there are always people out there who can help make me better.  There are people who have taken a specific aspect within the realm of strength and conditioning and dedicate their lives to make it their goal to master it.

There is a small gym about two hours north from where I live which is the self proclaimed Strongest gym in the West.  I can’t imagine anyone would want to argue this point.  Super Training Gym is the brainchild of powerlifting great, entrepreneur, coach and movie star (Bigger, Stronger Faster*) Mark Bell.  His gym is home to many record holding powerlifters and was named, one of the 30 best gyms in America, by Men’s Health in March 2008.

Mark’s powerlifting accomplishments include: a holder of a World and an American record, with his best lifts consisting of a 1,025 lbs squat, 854 lbs bench press, and deadlifted 755 lbs deadlift.  His best total (combined weight) for all three lifts is 2,551 lbs which is the highest in California history.

The bottom line: Mark Bell knows what it takes to teach people how to get strong and I wanted to learn more about how to help myself and my athletes get the most out of our training in a safe and effective manner.

Mark’s gym is a 1,000 sq ft. room tucked away in the back of a larger gym known as, Midtown Strength and Conditioning.  Though only one brick wall separates the two spaces, there is clearly a distinction between the two sides.  Midtown Strength and Conditioning is about four times the size of the Super Training Gym space.  It is well lit, has numerous bumper plates and lifting platforms, a turf area for sled drags and it even had its own room for stretching and soft tissue work.

Stepping towards the other side of the wall you know you’re in a different world.  The room is dark; the equipment is crammed yet effectively set up in every available space, the music turns from the current popular tunes to metal, rap and rock songs of yesteryear.  There is a slightly different vibe here.

On the Midtown Gym side, members might be training for their own individual reasons: weight loss, get in shape, complete a goal, learn new methods of training, or sports performance training.  However, when you cross into the Super Training Gym side everyone in there is striving for the same thing; to get stronger by lifting as much weight that they can in a safe and technical manner.  These gym-goers’ ultimate goal is to lift more weight in the deadlift, squat and bench press.

I must admit I was a bit nervous about going up to lift with these guys.  Let me put things in perspective; I can’t even attempt to lift the weights of the female record holder who weighed about 50 lbs. less than I did.  However, I pushed the anxiety down and stepped into the dark room and prepared myself for whatever was going to get thrown at me.  To my relief, Mark and the Super Training crew could not have been more accepting and helpful towards my goal of learning how to perform the three major lifts.  They didn’t care that I was the weakest person in the room because they knew I had the same goal in mind; to learn proper technique in the three major lifts so I could get myself and the people I train stronger.

Here are the main tips I got from Mark and some of his teammates in the three major lifts.

When I showed Mark my box squat technique he first addressed a common technicality that many people do when squatting.  When I originally box squatted I was in a technically safe position with my back arched and hips back.  This technique has the weight pushing me forward and forcing my shins forward and requiring me to use my quads to help assist me in getting back up.  Mark pointed out that I should be using my glutes and hamstrings for a more powerful hip extension.  Not only does this allow the person to move more weight, the hamstring activation is more applicable to sports performance.  Mark also suggested that I was also taking too long on my descent which depleted my strength to get back up. 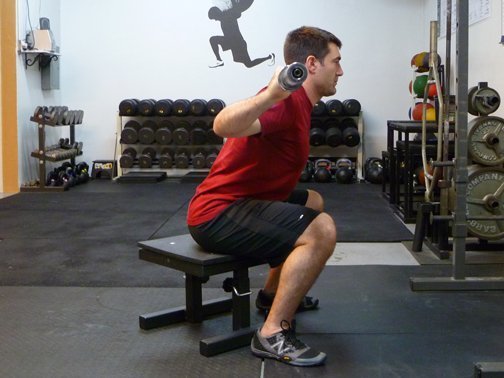 Mark set up a high box so I could learn my new technique.  He told me three concepts: 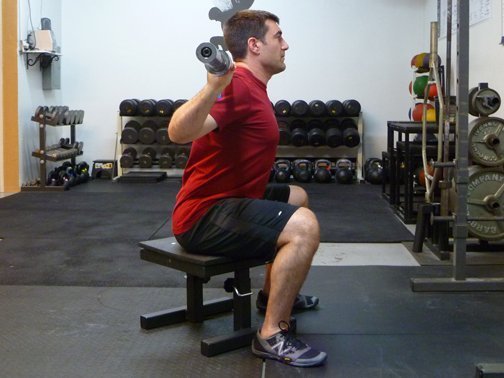 Mark also showed me a wonderful seated band abduction exercise that is great for training my leg strength to help force my knees out during the squat. 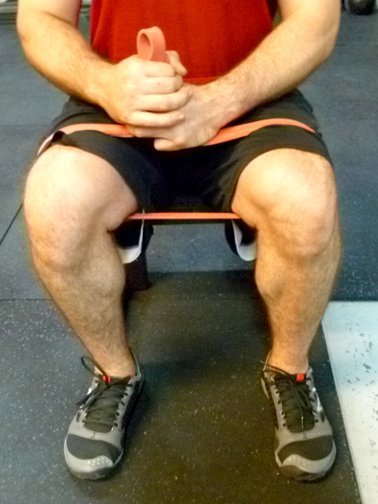 These three tips took some time for my brain to grasp so I could replicate the movements and with some practice I am now able to use my hips much more effectively and with the new strength and the flexibility in the adductors I have since upped the weight and lowered the box.

I told Mark that I would get to a particular weight range in my deadlift and then had trouble moving up or I would pull a hip muscle.  I also felt very slow with the weight off the floor.  Like my box squat, my deadlift set up was not ideal for maximal strength.  I had the proper arched back but my hips were not low enough and my shoulders were too far over the bar. 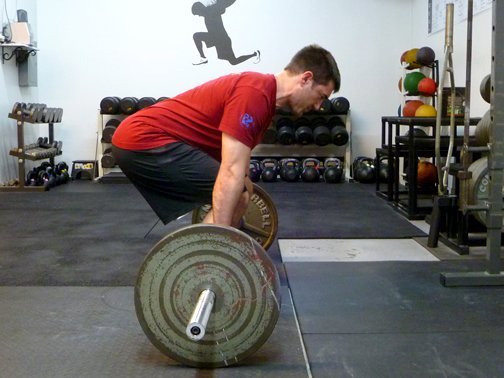 Mark pointed out the biggest things I had to work on to correct my problems:

I have been working hard to get my hips underneath my shoulders so that I am able to use them more.  I was told that one of the best ways is to pull my hips as low as they can go during the set up and then raise them up just a little; tension in the hips and hamstrings must still be present. 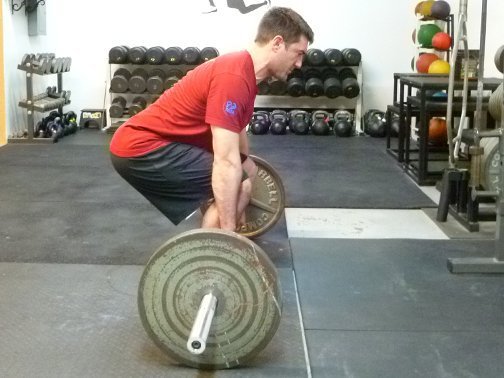 My bench press technique was the one lift that needed the least amount of tweaking.  I was just told to keep two key concepts in mind because these are the first two technical points that break down when I get fatigued.

My time training and learning at Super Training Gym was invaluable.  Not only is it, The Strongest Gym in the West, it could also be called The Smartest Gym in the West.  The knowledge and the ability to coach the three main powerlifts are unparalleled to any gym I have visited.  I hope to practice my lifts, get stronger and help my athletes achieve a higher level of success.

To learn more about Mark Bell and Super Training Gym please follow his video blog Super Training TV where he answers all of his follower’s questions about strength and conditioning. 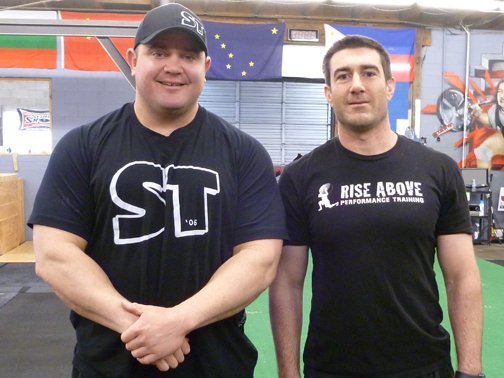