It is day number two of the kettlebell workshop and fatigue has set in.  After the 1-hour Long Cycle Charity Event and four hours of jerk training I did have trouble getting out of bed the next morning.  But that’s not to say that I was not excited to learn more from two great kettlebell lifters of our generation, Sergey Rudnev and Sergey Rachinskiy. With a little foam rolling and some mobility drills I tried to ignore my soreness and was ready to take on the Snatch and the Long Cycle.

As eluded to in the first article on the Jerks;  Girevoy (kettlebell) Sport (GS) style of kettlebell training focuses on relaxation and efficiency of movement all to get as many reps as possible over a period of time.

The body position of the snatch is similar to how you would start with any other kettlebell movement.  When grabbing the handle, the middle finger will be in the center of the handle. The handle should rest at the base of the fingers to minimize callus irritation at the palm where it meets the fingers.  For extra support the index finger can cross and lock over the thumb.

After the upswing and the arm begins to leave the trunk it is time for the initiation of the pull.  It is important that you wait for disconnection of the arm against the trunk, because a common mistake is initiating the pull too early.  To accelerate the kettlebell through the pull phase to get it overhead, the hips and trunk are allowed to rotate through the transverse plane (side-to-side).  As an example: if you are snatching the kettlebell with your right hand, as the kettlebell goes into the pull and up overhead the left hip will rotate forward and then snap back to get the kettlebell to the top.

To get the kettlebell to the top position you can insert the hand one of two ways; straight over the top or from the side.  For myself, when using the transverse hip shift it seemed really natural for me to insert my hand in the sideways manner because the hip movement causes the kettlebell to move in an inside-out manner.  If I did not perform the transverse hip movement (like in the RKC Style) the over the top manner seems more natural.

At the top of the snatch, much like in the jerk, the handle rests on the thumb while the wrist and hand are both relaxed.

One of the more vital component that distinguishes the GS style drop over from other styles (RKC) is that as you turn the hand towards your head and drop the elbow the upper body simultaneously moves away (backward) from the dropping kettlebell; this is much different than dropping forward with the falling kettlebell.  GS athletes push their body away from the kettlebell for efficiency purposes; this keeps the kettlebell close to the body and allows for easier arm to trunk connection.

Check out this video compilation for visual demonstrations for the techniques mentioned above:

The GS long cycle is taking either one (women) or two (men) kettlebells and performing the clean and jerk for repetitions.  It is basically the sum of two parts that we have already covered.  The jerk, that is described in the first article and the swing used during the snatch are very similar during the long cycle with only minor differences.

Hand position on the backswing can be done either with the thumb up or thumb down; the Russian coaches said it was about 50/50 in terms or what the athletes use.

Here is an expert video to give you an idea of how to perform the long cycle properly.

Two days, eight hours, and a ton of information.  I hope these few tips give you a glimpse into the GS kettlebell world and help you out with your training. 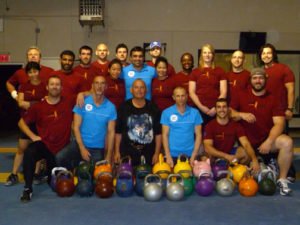