I had just finished the 1-hour Long Cycle Charity Event and was basking on the elation of accomplishing such a daunting task when reality set in; wait, now I have to complete day one of the kettlebell workshop.  The workshop was four hours and we were covering the jerk. Suddenly the 1-hour long cycle event and the 360+ long cycle clean and jerks I did seemed a little small in comparison.  Were my arms and shoulders going to reject me half-way through?  Whatever came next, I told myself, that I better mentally prepare for the hours ahead and hope that the Russian coaches don’t break me.

Were these coaches serious?  Four hours on one single movement?  About five minutes into the workshop you realized that world class kettlebell athletes Sergey Rudnev and Sergey Rachinskiy could have spoken for days about the nuances of the kettlebell jerk and maintained a captive audience.  Their insight was unselfish and priceless.  In this article I will share some of the many tips I have learned to help your kettlebell jerks become more efficient.

The racked position is different depending on what style you use.  For the Girevoy (kettlebell) sport (GS) style the kettlebells sit much closer to the midline of the body, the hips are forward and elbows are to get as close to the Iliac Crests of the hips as possible.

Stance is very important for a successful racking of the kettlebells leading to successful jerks.  Rudnev Rachinskiy expressed that the feet should not be too wide; there is no need for a back swing when solely performing the jerks so getting your legs underneath you in a narrower stance than in the long cycle (performing jerks after a full swing and clean) is optimal.  Unlike hardstyle kettlebell lifting (RKC)the GS lifters try to lift as many reps as they can over a long period of time; the whole sprint vs. a marathon analogy.  The GS lifter’s legs should be loose and relaxed to allow for maximal acceleration of the kettlebells and increased blood flow when going for those long sets.

After the kettlebells are racked and you have found your comfortable racked position, it is time to get them overhead.  The initial phase is the knee dip, and it is a knee dip not a squat.  If you are like me and try to keep your shins vertical when squatting and doing other leg work, this is hard to clear your mechanical instincts.  With relaxed legs; you literally shoot the knees forward as if someone hit your knees from behind, and at the same time, your hips drop forward a bit while having the kettlebells maintain contact with your chest and hips.

The second dip commences when the kettlebells are sent out of the rack position and your knees and ankles are extended, you then dive under the kettlebells also known as the under squat.  The under squat is short and the jerk is complete when the heels drive back into the ground and the knees extend and you are in a complete standing position know as the fixation.

The Fixation is the completed movement where the body is at the standing position and the weights are overhead.  The coaches continually stress the importance of keeping the arms very relaxed to allow for maximum bump after the first dip which leads to proper fixation. 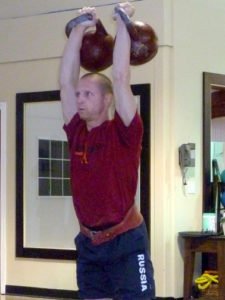 When getting the kettlebells overhead, concentrating on thumb position helps aid in the proper trajectory of the kettlebells.  The thumb should be in a nearly neutral forearm position traveling directly upward in the sagittal plane.  One common mistake is overpronating the thumbs so the palms travel forward, this will overload the shoulders and triceps which will cause these muscles to fatigue which will result in lower number of repetitions.  The handle of the kettlebells should also be resting on the thumbs with the other fingers open and resting.

Check out this video below of coach Sergey Rudnev performing three minutes of kettlbell jerks:

Some equipment that help GS athletes complete high numbers of repetitions for the jerks include Olympic weight lifting shoes which have a raised heel which aides in the hip dip phases and also provide a strong base of support.  Many GS lifters also use a weight belt, not necessarily for increasing intra-abdominal pressure but to help aid the arms during the drop phase of the jerks.  The belt does not allow the elbows to slip outside the trunk.

There you have some of the finer details of the Kettlebell Jerks as taught to me by two of the greatest kettlebell lifters of our generation.  In the second article I will cover some points from Day 2 of the workshop covering The Snatch and the Long Cycle.

Check out the IKSFA website for more information about the event.