When I recently went shopping at Whole Foods (some of my friends tease and call it Whole Pay Check) the other week I noticed a small chart embedded within the produce isles ranking certain food items (mostly produce) in terms of their nutrient density.  The system was called the ANDI Nutrition rating System and I had not heard of it until I saw it at the store.  I went home and did some research to figure out what it is and if we should consider this system when purchasing our food for the week.

ADNI; What, who, why, where

It turns out that the ANDI rating system (short for Aggregate Nutrient Density Index) is a relatively new ranking system which analyzes many foods for their nutrient density and ranks them accordingly.  The ranking of the food quality is based mainly on looking at the vitamin content such as:

They factor in the ORAC score X 2 (Oxygen Radical Absorbance Capacity) which is a method of measuring the antioxidant quality of foods.

If the foods contain high levels of the above vitamins and have a low oxidation they are ranked with a higher score (closer to 1000) and if they do not possess the above qualities a score closer to zero is given. 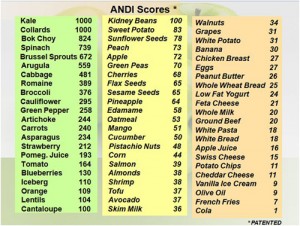 This system was created by Dr. Joel Fuhrman who has a whole campaign called Eat Right America which provides nutritional education, current diet analysis and personalized programs that help people get on track to regain lost physical functions (weight loss, increased energy etc.) with a proper dietary plan.  According to Dr. Fuhrman’s site;

Our modern, low-nutrient eating style leads to an overweight population with common diseases of nutritional ignorance and medical costs spiraling out of control. We need to flip our traditional thinking upside down, and begin eating a diet rich in vegetables, fruits, nuts, seeds, and grains.

Whole Foods Market has adopted Dr. Fuhrman’s program and looks to have an affiliate relationship with the program.  The Whole Foods web site does not have much information about the program, nor can you join or utilize it through the site but you can link back to the Eat Right America site.

Eat Right America; Is it for me?

With all the different diets and food pyramids out there this one tries to distinguish itself with a quantifiable rating system comparing food choices.  This rating system does have some draw for the consumer because using this system we can say that Item X is ranked higher (or is better) than Item B.  For a person who frequently consumes vegetables this rating system might be a good way to find some variety within and incorporate them into the rotation.  I now for myself I tend to have my weekly staples when it comes to vegetables.  I did look the chart over and decided to mix it up a bit and buy some organic kale.  It is interesting and not a bad way to supplement an already balanced and healthy diet.

Just with almost any system it does not have its potential pitfalls.  One glaring hole that I saw is that the ranking system included some potentially healthy food sources that ranked low on the scale which may cause people to believe that they are not healthy.  Food like avocados, walnuts, chicken breast, ground beef and olive oil all scored really low on the scale.  These foods, in their naturally raised environments provide a variety of nutrients for the body and compose a healthy and balanced diet.

This ranking of the potentially healthy proteins and fats on the scale may lead one to think that a diet of plant based foods is all that is required for optimal health.  Eat Right America also has its own version of a food pyramid with the plant food comprising the base and fats and protein sources at the tip lumped in with sugar and processed foods.  You really have to ask yourself, are they equal? 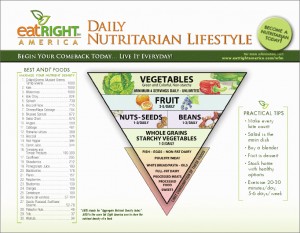 This step might be taking it too far and even the highly debated USDA food pyramid has a separate section for the protein sources and the sugars.  Without a little research by just looking at this pyramid, it may suggest that the only way to lose weight and be healthy is to have a diet almost completely based on plant food sources.

The strange notion is that when I was searching the Eat Right America web site to see if they flat-out say something like “we are a plant-based/vegetarian system….” I Couldn’t find it.  However I did find this statement:

Keep in mind that nutrient density scoring is not the only factor that determines good health. For example, if we only ate foods with a high nutrient density score our diet would be too low in fat. So we have to pick some foods with lower nutrient density scores (but preferably the ones with the healthier fats) to include in our high nutrient diet. Additionally, if a thin person or highly physically active individual ate only the highest nutrient foods they would become so full from all of the fiber and nutrients that would keep them from meeting their caloric needs and they would eventually become too thin. This of course gives you a hint at the secret to permanent weight control.

After this I was waiting for some suggestions like adding; extra virgin oil, free range eggs and grass-fed beef; But there was nothing more on the subject.  So the Eat Right America system seems a bit perplexing and non-committal.

As a scoring chart the ANDI system provides some different produce options and comparison entertainment, however using the Eat Right System as your source of health and weight loss might be ill-advised without some more research.

In the meantime keep life simple, just eat a variety of healthy foods, keep the nutrients balanced from different sources, take your vitamins and say your prayers and all should be right.