The following article is a guest post by San Francisco based physical therapist Jeff Lam, MSPT, CSCS.  You can read oare about Jeff below after the article.

It happens almost everyday in my rehabilitation clinic and I don’t mind it at all, because it gives me the opportunity to educate and help correct something that can become more destructive later. It occurs when I ask a patient to perform a functional squat test, a closed chain test that involves observation of one’s ability to perform a graded squat. Amongst the items that I look for including thoraco-lumbar symmetry and pelvic rhythm, I make a concerted effort to assess what the foot-ankle complex is doing. When the foot-ankle collapses medially or towards midline, this is known as pronation (see picture below). This will occur along with calcaneal eversion or heel directed outward and commonly an increased valgus angle at the knee, picture both knees buckling inward. These are all tell-tale signs of weakness and inflexibility throughout the lower kinematic chain, all of which can be corrected by putting the foot in ideal alignment. 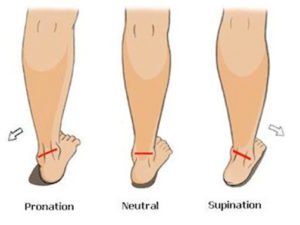 This is where subtalar neutral comes into place. Simply put, the orthopedic definition of subtalar neutral is the position in which the forefoot is locked on the rearfoot with maximum pronation of the midtarsal joint. Or you may say, when the foot is neither pronated nor supinated. Another consideration is the subtalar joint axis, an axis at which the subtalar joint (the meeting point of the talus/midfoot and calcaneus/heel) functions (see picture below). Unlike a simple hinge joint like the elbow, this joint is unique in the sense that its axis is oblique and at an angle.

The subtalar joint is a key joint, a good starting point to address in correcting lower kinematic chain deficiencies. In collaboration with the talocrural joint and midtarsal joint, these three joints combine to form the ankle-foot complex, and ultimately allows an athlete to adapt to uneven terrain and absorb shock in open chain activities. In the case of closed chain activities such as the functional squat or a power lifting squat for that matter, this complex assists in absorbing lower extremity rotation and providing a rigid lever for effective propulsion.

When it comes to foot injuries and dysfunctions, knowing how to achieve subtalar neutral may become an important element in exercise prescription in addition to orthotic assessments where findings in non-weight bearing neutral are accounted for. I am in belief that the closer one is to subtalar neutral, the more functionally sound one’s movement will be and in effect will be more efficient and safe because of it.

So this is what I do to help achieve this in the clinic. I have a patient stand shoulder width apart without shoes and ask them to rotate their trunk to the left and right. This will naturally produce pronation/eversion in one’s ankle and supination/inversion in the other. As a practioner, I have my thumb and index finger palpating for symmetry in talar pronunciation anteriorly (in the front) as I help to rock the client’s calcaneus into what would be “ballpark” subtalar neutral (see picture below). This simple tactile feedback has proven effective for me clinically and does not require much time. It can also be isolated to one lower extremity as in single leg standing and forward lunges where the effected limb is in the front. With practice and consistent cue, whether verbal or tactile, I can help progress a client from doing low grade rehabilitation (i.e. 3 sets of 10 wall slides and 1 x 60 seconds wall sit) to a more high velocity exercise that borders a power lift, all awhile holding subtalar neutral. 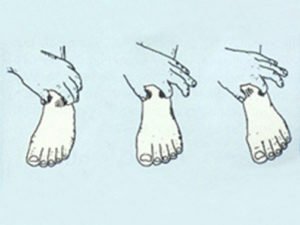 The video below demonstrates more of Jeff’s therapy techniques to achieve subtalar neutral:

Jeff Lam works at MoveWell Physical Therapy in San Francisco. He received his degree in physical therapy from Columbia University in New York City. His relationship with Doug Fioranelli at Rise Above Strength Performance Training dates back to their days as Exercise & Sport Science students from the University of San Francisco, NCAA Division I collegiate cross country teammates for the Dons, and numerous pre-sunrise roadtrips to triathlon events throughout Northern California.

Jeff would like to hear from you about interests in future topics.