Jeff Lam is a physical therapist and the owner of MoveWell Physical Therapy.  Jeff is an avid triathlete and has done several races this season, however his training season did not start off healthy as he acquired a foot injury.

When Jeff was injured I asked him what he was going to do and how he planned on training around it.  I thought it would be great if my readers also got an idea of what a therapist would do for a particular injury.

Injuries are tricky and they are not to be treated the same for everyone, so keep in mind this is what Jeff did to help himself get back on track and race again this season.

Sometimes the Best Thing to do is Nothing at All

It’s not that often that I get to talk about myself in a submission for a rehabilitation/strength & conditioning article so when the opportunity presents itself, I shall take it! As I am sitting here documenting this for the first time, I am experiencing intermittent pains, sometimes sharp, most often throbbing in nature. I rate it as up to 4/10 on the pain scale. The location of pain varies between the base of the Right 5th metatarsal and on occasion shoots into the DIP (distal interphalangeal joint), or in layman’s terms, the pinky toe. 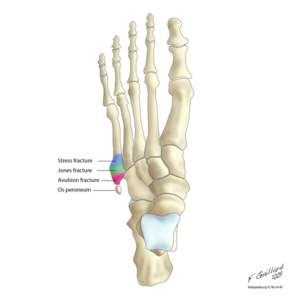 It’s been 15 days to be exact since I had apparently injured it after the HITS Napa Valley Triathlon and I was beginning to worry whether I had signs of a Jone’s fracture. 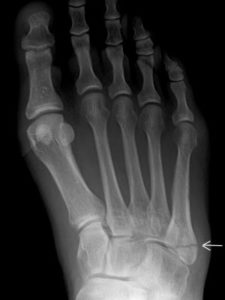 Because I have never experienced more than a high grade inversion sprain and a diagnosis of pes planus in my feet, in addition to the lack of a specific incident during or after the race that I remember being close to traumatic, I brushed it off. I cycled for 40 miles 2 days later and jogged for 1 mile the Thursday after the race in preparation for another race that weekend. The dawn of a new triathlon season, the need to please my sponsors, and the unseasonal warm weather did not make it easy to hold back. And rest. Sometimes the best thing to do is to do nothing at all. Quote me on that one.

Based on the chronicle of events I just described, my situation worsened and prompted me to get a referral from Dr. Sonia Bell MD for radiology assessment and to see a podiatrist, Dr. Jason Blythe at Mission Podiatry Group. X-rays showed 3 thin white lines coursing lateral to medial and dorsally, if they were any more parallel to each other, it would have resembled the Adidas 3-stripes logo. I was appropriately diagnosed with a stress response/reaction (some call it a “bone bruise”) and was advised to limit any athletic activity for 2 weeks, weight bear as tolerated in a supportive shoe much like a trail hiking shoe, even swap out the insoles for a Superfeet orthotic. As I am aware that stress fractures can often NOT show, I did my best to comply with Dr Blythe’s orders. But being a disciplined triathlete with borderline OCD, it was not an easy task.

As gait was restored to normal and the atrophy subsided, I began some elementary ankle stability exercises…the same bread and butter techniques I show my own patients. Without running into too much detail, it involved some Theraband work, BOSU and BAPS board proprioception training (picture 3), even barefoot walking in the sand when the opportunity presented itself. For return to running, I followed a template that was published in the February 2012 issue of Competitor Magazine involving 10 x 1 minute “jog” the first day, 6 x 2 minute “run” 2 and 4 days later. This was combined with strength and conditioning work in the weight room and cross training on the other days for the first week. The protocol leveled up to 7 x 9 minute run by week 8 but I modified it based on my progress, which I will often advised my own patients to do. Minus some residual symptoms of plantar fascitis, I was confident that this was the right approach. 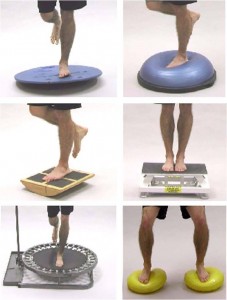 Fast forward to September 1, 2013. As I am finishing this write up, I am currently back up to 30 to 40 miles a week, which is just a fraction of where I was and even smaller fraction from where I want to be in training for my first marathon this December in hoping to qualify for Boston. But I will take it. No persistent pain, no recurrent stress fracture, surgery room avoided. Sometimes the best thing to do is to do nothing at all.

Jeff would like to hear from you about interests in future topics. Email him at jeff_therapist@yahoo.com

Jeff Lam works at MoveWell Physical Therapy in San Francisco and newly established location in Belmont. He received his degree in physical therapy from Columbia University in New York City. His relationship with Doug Fioranelli at Rise Above Strength Performance Training dates back to their days as Exercise & Sport Science students from the University of San Francisco, NCAA Division I collegiate cross country teammates for the Dons, and numerous pre-sunrise roadtrips to triathlon events throughout Northern California. 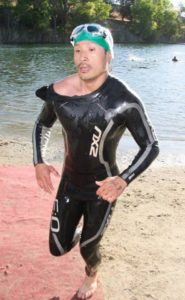