Seven years has gone by so fast and it is time to reflect, be thankful and celebrate all over again. Since I first opened Rise Above Performance Training I truly wanted to make a living by, building a family, helping the local community with their fitness and injury prevention needs and give back to greater causes. This year’s party was a culmination of all three of my goals.
With a very hectic schedule, this year seemed to get away from us and we could not find a good date for the anniversary party until we realized that we could combine the party with my favorite charity event; the 1-Hour Kettlebell Long Cycle.

This October the 1-Hour Kettlebell Long Cycle event is also celebrating its 6th anniversary. If you do not know the history behind the event, Jason Dolby of the Orange Kettlebell Club (OKC) decided six years ago that he wanted to celebrate his birthday in epic fashion by combining three things he loves most in this world: lifting kettlebells, his friends and family and helping out those who need it most.
Over the six years this event has gone from 19 lifters in Southern California at the First Long Cycle Charity event, to over 760 lifters, and 67 satellite locations representing 15 countries.
Jason again teamed up with Kettlebells4Autism (KB4A) and, once again pulled off an even bigger and better event. Over 760 lifters took part worldwide and more than $36,000 was raised for the chosen autism beneficiary, Association for Science in Autism Treatment. 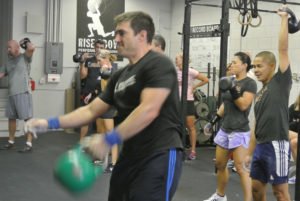 This year at Rise Above we decided to be one of those satellite locations and then throw our anniversary party afterwards and the response was so well received that this format might be the way Rise Above is going to continually celebrate in the future.
We had 18 lifters; four of whom completed the whole hour solo and the rest were on relay teams of two and three. Not only did everyone make the whole hour, the Rise Above community came up big with their charitable support. Our gym alone raised $2,375 for Kettlebells4Autism (KB4A).
I am truly proud of the Rise Above community for not only supporting the cause financially but also coming in to participate in the kettlebell lifting marathon. 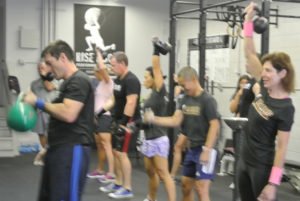 In a very surprising moment after the event Charles Stone presented Rise Above with two certificates of recognition from the city of Belmont and from the State Assembly of California. It is nice to know that everything I have been building these past seven years has not gone unnoticed and we are truly impacting the community in a positive way. We want to build on that for years to come. 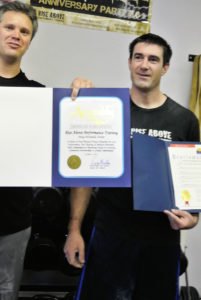 With that said I could not have done it alone. Special thanks goes out to Jeff of MoveWell for bringing high quality physical therapy to Rise Above and to Debra who is the creative genius behind the design and execution of all of the posters, fliers, monthly newsletters and online work that goes into the business. I also want to thank my family for their continued support and especially to my sister for helping me with the articles, the blog and other publications. A very special thanks goes out to the entire Rise Above community who supports the gym and finds pleasure in fitness with us.
Lastly, I would like to thank all of you who subscribe to the email list. I greatly appreciate you reading my articles and watching my videos. I do my best to provide you with the best strength and conditioning insights. I would not have lasted seven years without the support of my subscribers. I hope to have all of you come by the gym to visit, workout or compete at the next anniversary party and lift some kettlebells for charity with us. 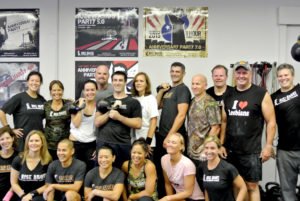 For more pictures of this great event check out the album on The Facebook Page.