The following is a guest blog post from Debra

Following the catastrophic earthquake that struck Haiti on January 12, 2010, many relief efforts and organizations started reaching out to provide emergency funding, medical supplies, food and shelter. A reported three million people have been affected by this earthquake; innumerable homes and major structures destroyed. This incident hit particularly close to home because I was only 13 years old when the 6.9 Loma Prieta Earthquake hit the Bay Area in 1989. I still remember the incredible damage it did to our homes, bridges and highways. I can only image the devastating effect an earthquake of that magnitude could have on a third-world country like Haiti. There was no doubt in my mind that I wanted to help, but with so many organizations to choose from it became a little overwhelming. So when Doug asked me if I wanted to “Workout with Kettlebells for Haiti,” I thought to myself, “Absolutely!” I probably should have asked a ton of questions, but instead I decided to “trust my trainer.” As always, this is a good and bad idea. GOOD idea because Doug always knows what is best, but BAD because I walked into OKC (Orange Kettlebell Club) with no idea about what I was getting myself into. All I knew was that Doug was excited to learn a NEW Kettlebell style (AKC/IKFF) and all the proceeds went to UNICEF for Haitian Relief. 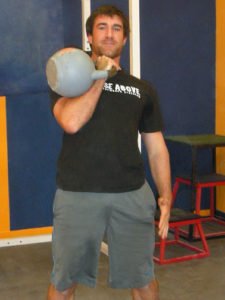 Upon arrival we were greeted by John Wild Buckly, who I now lovingly refer to as Thor. Thor is no mere mortal; he stands about 6’5″ and is built like a Ford Truck. As he graciously ushered us into the Juno gym there were a little over two-dozen multi-colored Kettlebells staring at me. I have to admit I was a little intimidated because all of the Kettlebells were the same size—HUGE. I’m used to seeing a range of sizes based on weight so I know which ones NOT to use. As more people arrived, everyone started asking each other the same questions. “What is your experience with Kettlebells? Who do you train with? Have you ever done a Kettlebell workshop before?” While there was a range of answers, there were also quite a few serious people training for competition. Competition?!?! I thought because I knew how to do a pretty decent “bottoms-up” press and a “windmill” I was going to be slightly ahead of the game. NOPE!!! 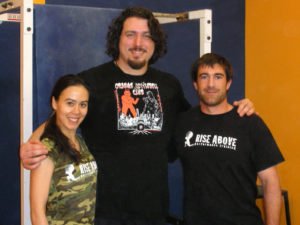 Luckily, John is a great teacher. He started by talking about his training and the different methodologies and styles. He also explained and demonstrated things in such a way that everything just “made sense.” I was completely satisfied after the first five minutes when he taught me how to address the kettlebell to protect my hands and prevent callusing and further tearing. He then went through the basics: swings, cleans and presses. Fundamentally, I started to understand how each move was building upon itself. For instance, in order to “press” the kettlebell you have to “clean it”, in order to “clean it,” you have to “swing” it. By the end of the seminar I was able to perform moves like the “jerk” and the infamous “snatch.” John also taught modifications based on training preferences. Essentially, if you are training for endurance then you have to shorten your technique in order to save time and conserve energy. If you want to get stronger you can modify your moves to help you lift heavier weight safely. But what I found really inspiring about John was that he mastered all of these different techniques and then evolved and developed his own style for competition. That, and the fact that he used “the beast,” which is a 48kg/106lb kettlebell, for most of his demonstrations.

The highlight however was all the feats of strength in the gym that day. For instance, I was in awe of this slender, young, 26-year-old woman who “jerked” a 24kg/53lb kettlebell over her head. Then these two other women “cleaned and pressed” a 12kg/26lb kettlebell for four minutes on each arm. But leave it to Doug to “RISE ABOVE” when he swung the second largest competition kettlebell in the world 70kg/155lb like a CHAMP. I have to admit you know you’re training with the right guy when another incredible trainer complements him on his PURE BADASSNESS! But I couldn’t let Doug have all the fun. So at the end of class I “dead-lifted” the 70kg, which out-weighed me by 43 pounds and is the heaviest weight I have ever lifted. 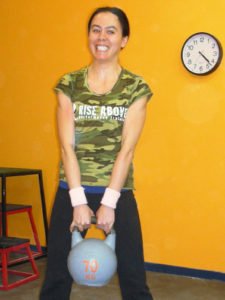 And just when I thought things couldn’t get any better, John “snatched’ me in the air like a human kettlebell. It was freaking AWESOME!!!! 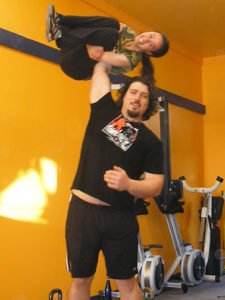 With a giant smile on my face, I left feeling like I had done something good for the people of Haiti and myself. However, I thought by the end of the seminar I would be able to answer the most controversial Kettlebell question “RKC (Russian Kettlebell Certification) vs. AKC (American Kettlebell Certification)?” It’s like the 1980 Olympics all over again. The Stars and Stripes against the Iron Curtain! Doug “the Body” RKC vs. John “Thor” AKC/IKFF! Unfortunately I don’t know enough about either to provide any sort of educated insight. I only know what feels right for me. I love the RKC basics. It just looks and feels crisp, clean and strong. However, I naturally twist my wrist when I “snatch” which is in line with the AKC “corkscrew snatch.” So how can I deny my body of a movement it was born to do? “I shouldn’t!” As long as I’m training safely, why not follow in John’s foot steps and create a style all my own!

Doug, thanks for recommending this seminar and for being such a great trainer and leader. John, thanks for all your help and for hosting this incredible workshop for those in need.

*Please support and check out a few of John’s sites: