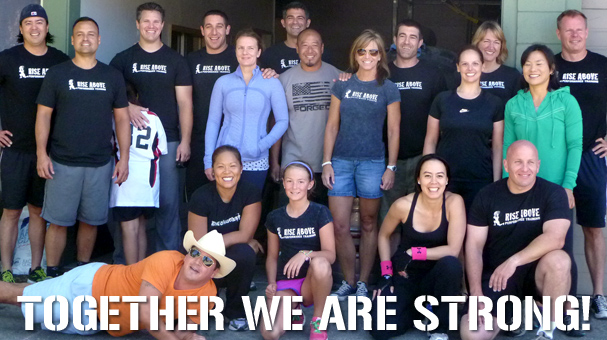 It's been four years since I opened Rise Above Performance Training and on September 15, 2012 we had our famous anniversary party. We had another great time giving thanks to my family, friends, and dedicated gym goers for their ongoing support in allowing me to build a gym and career based around what I enjoy most in life.

The party was another huge success and it seems to be better with each passing year. Of course we had our Strongman Competition where three teams of four participants competed to become the 2012 Champions.

The Strongman Competition consisted of three events. The first was a double kettlebell clean for 5 repetitions then performing pull ups for 2 reps and then repeating the 5 double cleans (men over 200lbs. used 32kg, under 200lbs used 24kg) and then adding 2 reps to the pull ups until the competitor could not complete any more rounds.

The women performed 5 double kettlebell swings (12kg) then did a push up ladder increasing each round by 2 repetitions after the 5 double swings were complete. We had several male competitors complete 3 rounds (12 pull ups and 15 double cleans) but only one female (Lee) competitor completed 7 rounds (56 push ups and 35 double swings). Overall team "WhoopAss Wednesday" Won (5 Round - Debra, 3 Rounds - Reggie, 6 Rounds – Jen and 7 Rounds - Lee).

The next event was a timed relay consisting of kettlebell farmer walk variations. One competitor had to complete 5 repetitions of double kettlebell deadlifts then quickly walk 50 feet with the kettlebells in the low position. Next they had to perform 5 kettlebell front squats then rack farmer walk 50 feet and finally finish with 5 double kettlebell push presses followed by the overhead farmers walk. Each person on each team had to complete the challenge and the fastest team wins. Again men over 200lbs. used 32kg, and under 200lbs used 24kg; women used the 12kg. kettlebells. Team Blue Line (Sam, Alex, Aaron, Steve) barely squeaked out a win over Team Fine Wine.

This competition was also special because we had our first tree-way tie and decided to have a final tiebreaker event with the sandbag. We opted for a team relay event again with the best time taking home the 2012 Championship. Each competitor had to perform 5 burpees with the sandbag (males: 70lb. females: 50lb.), farmer walk with the bag 25 yards, perform 5 more burpees and then walk back and pass it off to their partner. When it was all said and done Team Blue Line (Sam, Alex, Aaron, Mark) came out victorious.

As always the key to making or breaking a party is the food. I am very thankful that Chef Javier Montano came back again this year to feed this hungry crowd. Shrimp, steak, sausage, sweet potato mash, salad and quinoa were on the menu and everyone left stuffed. I highly recommend you contact Chef Javier Montano for your next event.

I'd like to congratulate all of the teams and each of the participants for making it a memorable event. I am truly amazed and thankful for another great year of Rise Above Performance Training and I owe it all to the members and to the people who help me out behind the scenes. Special thanks goes out to AJ for helping out around the gym with training and to Debra who is the creative genius behind the design and execution of all of the posters, fliers, monthly newsletters and online work that goes into the business. I also want to thank my family for their continued support and especially to my sister for helping me with the articles for the blog and other publications.

Lastly, I would like to thank all of you who subscribe to the email list. I greatly appreciate you reading my articles and watching my videos. I do my best to provide you with the best strength and conditioning insights. I would not have lasted four years without the support of my subscribers. I hope to have all of you come by the gym to visit, lift or compete at the next anniversary party.

Until then: Thanks and Stay Strong. 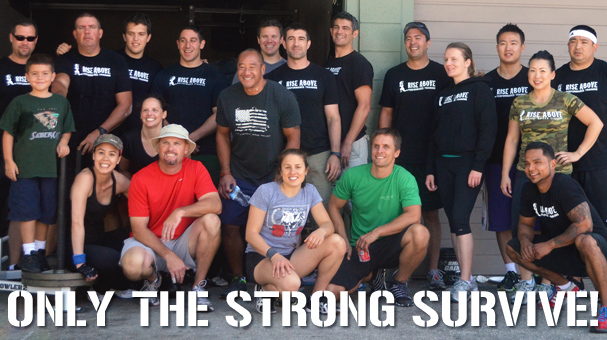 Rise Above Performance Training made it through our third year and we owe it all to you. This year's party was much like last year's only bigger and better. I want to thank all the various people who came out to compete, celebrate and support the gym on this great day. Special thanks to Aj and Debra who helped me pull this off; and last but not least, thanks to Chef Javier Montano for once again cooking an incredible feast for everyone.

We kicked things off with a Team Competition featuring four teams composed of various members of the gym. The Pull Up/Push Up Challenge; performing a rep of each and going up a rep each round until no more reps could be completed. We had two males and one female competitor making it as high as seven reps for each exercise.

This year also marked the first ever Strongkid competition. The competition was two events consisting of hanging on the bar for max time and an individual medley of prowler push and farmers walk.

Like their parents who participated in the big event; these kids gave it their all. We had two hang on the bar for over three minutes and some very fast times in the medley that would give the old guys a run for their money.

Thanks to everyone who has supported me during these three years, I look forward to sharing many more with you all. 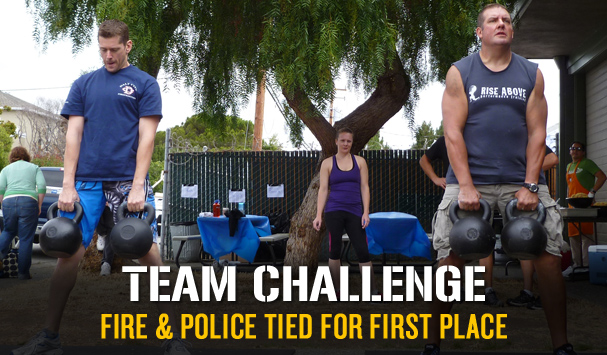 We couldn't have made it to our 2nd RISE ABOVE Anniversary Party without you. This year's party was bigger and better. Thanks again to everyone who came out to compete and AJ, Anthony and my sister Nicole who helped organize and run the events. A special thank you to Javier for cooking an incredible BBQ and Logan Christopher for his Feats of Strength and Kettlebell juggling.

We kicked things off with a Team Competition featuring Police, Fire, Trainers and Our Late Night Adults. We had incredibly strong competitors, but the women definitely made a name for themselves. The first event consisted of deadlifting for reps with two 20kg kettlebells (total 88lbs) for women and two 80kg (total 176lbs) for men. The second endurance event was a grueling prowler relay. The final medley event tested strength, endurance and speed. It included 20 body weight pull-ups; tire flipping, keg or sand bag overhead presses, weighted walking lunges and a sledge drag. When all the points were tallied we ended up with a tie between the Police and Firefighters. I’m incredibly proud of everyone who participated and next year we will crown 1 team victorious.

Check Out Our FACEBOOK Fan Page For More Pics.

I am looking forward to another great year of success.

We held a 90-Day Challenge where members could chose their own goals and whoever worked the hardest and sacrificed the most would win. The competition was tight and I appreciate everyone who participated, but winners must be declared.

Mike came to the gym once, trained and didn't come back. Almost a year went by before he wanted to return. I had to admit that I thought it was going to happen again but he proved everyone wrong. Mike is one of our most devout trainees and inspires us all. How Did Mike Do It! >>>

This working mother of two set some pretty tough goals for herself. Her focus and persistence paid off big-time and she crushed every goal and set a new standard of fitness for herself. Kristen shares her journey and provides some insights into how to fit training into a busy schedule.
How Did Kristen Do It! >>>

To show our appreciation to those who protect and serve our country we adopted an Air Force Captain and his Army Infantry Unit stationed in the mountains of Afghanistan for Christmas. With the help of our gym members we turned one box of holiday cheer into four giant boxes of food, supplies and letters of hope. Thanks to everyone who participated, we feel so blessed to be part of such an amazing group of people. We were also extremely lucky to receive an email from the Captain letting us know they received our package just in time for the Holidays.

Words cannot sufficiently relay the gratitude my Airmen and I feel toward you and your friends. We have received four packages containing a bounty one would never venture to ask for. Every package included items that are not only useful, but difficult to obtain in our current location. It was if you knew exactly what we wanted. I read a great deal and am especially appreciative of the various books and periodicals you included.

Many people pay lip service to supporting service members, but fail to take action. Your actions may seem like a small thing to you, but the impact is immeasurably large and speaks volumes about your kindness and patriotic spirit. You have my sincere gratitude for your efforts and direct impact on the morale of your military. For some of our younger warriors, this is their first deployment. Spending the holiday season away from home can increase the difficulty of the experience. Great Americans like yourselves offer tangible evidence that people care and are willing to go out of their way to display that emotion.

Please know that your significant gesture brightened the day for all of us--making life better for every one who experienced your generosity.

This was an incredible opportunity to show our support and reminds us all how much we have to be thankful for. With your help, we will definitely do this again! If you would like to adopt a trooper please feel free to email me or show your support year round with Operation: Care and Comfort. 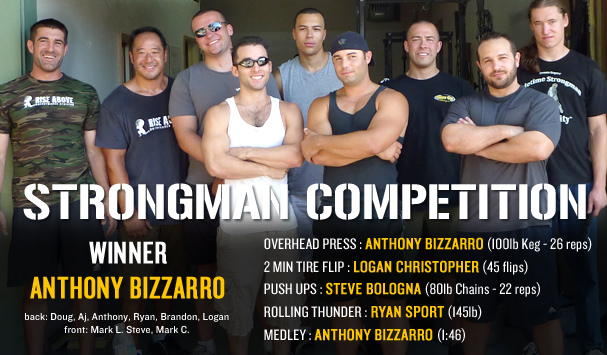 The RISE ABOVE Anniversary Party was a momentous occasion. I would like to thank my family, friends, and dedicated gym goers for your ongoing support in making my RISE ABOVE dreams continue to grow. Everyone who participated in the Anniversary Party has been an important part in the success of RISE ABOVE PERFORMANCE TRAINING.

The Anniversary Party consisted of a terrific day complete with great company, excellent food, and a fun, yet, grueling strength competition. A special thanks to AJ and Deb who helped organize and run the event; Ricci for BBQing the delicious tri-tip, Genevieve for the new sound system, Nicole and Kelly for their incredible cinematography, and Katherine from Evolution Catering providing us with healthy organic food samples. Without your help and support none of this would be possible.

I also wanted to thank Logan Christopher from Legendary Strength for competing in Rise Above's Strong Man Competition as well as putting on an incredible kettlebell demonstration, offering hints on how to bend nails and horse shoes, and showing the correct method for ripping a phonebook in half. It was ingenious how Logan managed to hold a phonebook with his teeth and completely tear it in half with one hand! If you haven’t already, please check out his videos and legendary strength website.

Some of the best highlights from the party involve RISE ABOVE'S first annual Strong Man Competition. We had seven incredibly tough competitors who gave it their all during the strenuous series of events. When all the points were tallied, the title of “RISE ABOVE STRONG MAN” went to Anthony Bizzarro, a longtime trainee and new RISE ABOVE recorder breaker!

Thanks again to everyone who came out to support this event. I am looking forward to another year of success and I'm already planning next year's events! It will be interesting to see who will RISE ABOVE to take on the challenge of the Strong Man Competition.

FOR THE LATEST IN SPORTS PERFORMANCE TRAINING, HEALTH, VIDEOS & MORE

*OUR PROMISE: We will never sell or share your info
QUICK NEWS LINKS

IN THE SPIRIT OF GIVING:
We Adopted A Trooper