In the first article I reviewed my first day at the Orange Kettlebell Club (OKC) workshop.  In the first article I highlighted John “Wild” Buckley’s insights into the mindset, philosophies and execution of the basic kettlebell movements; primarily with deadlift, swings, and presses.  The second weekend built upon these basics and took it to the next level focusing on proper breathing, cleans, jerks and snatches. 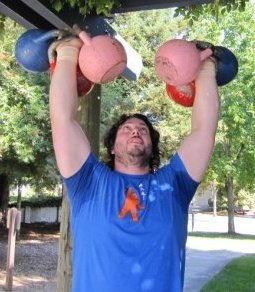 Once again I am taking the opportunity to pass along the knowledge I gained. In this article I have pictures of me trying to show the difference between the RKC style and the OKC style of kettlebell lifting.  I have not even come close to being well versed in the OKC style of kettlebell lifting so the technique pictures will not be perfect but should be enough to distinguish between the two types.

Now on to the OKC intermediate workshop review:

John expressed that the clean is the intermediate position for the kettlebell jerk.  It is a place to set up for jerks and it is also the place where you can rest between repetitions of jerks.  In order to rack properly and create the resting opportunity it is important to distribute the weight [of the kettlebells] evenly through the body.  The knees should remain locked, not loose, and the kettlebells should be aligned with the forward sitting hips.

One major difference between the RKC style rack and the OKC (and GS, kettlebell sport) style is that with the OKC style, the kettlebells will sit much lower on the body with the eventual goal of your elbows resting on your hips.  This is not an easy task especially with two kettlebells.  For many it is a technique that must be shaped throughout the years along with increasing the flexibility of the upper back. 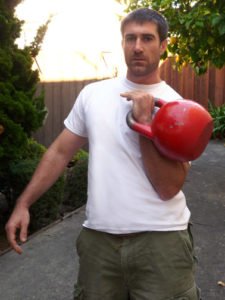 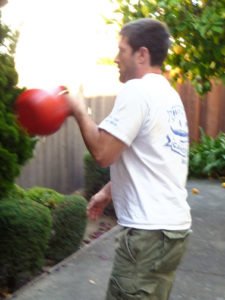 The jerk is a way to get the kettlebell overhead from the rack position.  Unlike a strict press, the jerk uses leg and body drive to accelerate the weight off the rack position just enough to allow the body to get underneath the weight until it can be locked out overhead in the standing position.  In the GS style they can do hundreds of jerk repetitions in a single training session, so technique and energy conservation are key.

John reemphasizes the necessity of a quality rack position.  A good quality rack position allows for proper anatomical breathing and loads the body to properly transfer energy from legs, through the body and to the arms.  John states that you should think about subtlety coiling your body like a spring before you jerk, then perform a thoracic (upper body) bump to get the kettlebell off the chest, get under the weight quickly and then get the weight over your hips (for stability) by sticking your chest out and extending your hips back while locking your knees.  This will get the kettlebell in a safe and stable position over the hips. 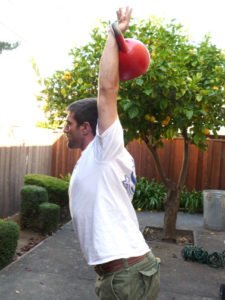 John says the key to performing the Snatch for continuous repetitions is to create a wavelike motion, where you are “literally rolling your body underneath the kettlebell.”  To do this you have to think about the techniques used to jerk the kettlebell, because, according to John, the snatch is essentially a kettlebell jerk without going into the rack position.  Unlike the RKC style snatch, GS athletes tend not to use a shoulder high pull to get the kettlebell back and up into the top position; this creates too much fatigue of the shoulders and grip by changing the direction of the kettlebell mid flight.  Instead John likes to let the kettlebell go where it wants to and then “sneak under the kettlebell.”  Proper hip drive from the swing, generating force behind the kettlebell and torso displacement at the appropriate time so that you move with the energy of the kettlebell; the kettlebell snatch can be done in a effortless pattern to achieve the wavelike motion and allowing for your repetition numbers to climb.

Remember the goal is to flow; it is not catching the weight at the top and dipping underneath.  By constantly practicing the jerks you can transfer that skill over to your snatch and you can learn to “sneak under the weight” without disjunction of the body and without using too much force that will fatigue you quickly.

Anatomical breathing is initially difficult to learn, especially when you are used to paradox breathing like I was taught.  John says that in the beginning one should not focus too much on breathing at the appropriate time because it will compromise snatch technique which is most important.  According to John, “just breathe.”

I always learn a ton when I train with John “Wild” Buckley at the OKC.  It makes me think about all the small details that correspond with physical movement.  In essence, kettlebell movements are not difficult to learn but when you want to take them to the next level whether it be using more weight or adding more repetitions, it is essential that the movements not only be practiced but understood at such a level that when you perform the movements there is minimal effort and maximal efficiency.  You become one with the kettlebell and when you occasionally lose that connection, you are in tune to get that connection back.  This takes not only a complete understanding of the movement but a high level awareness of your body.

There is always something to learn and I will be the first to admit I know almost nothing when it comes to GS style of kettlebell lifting.  That is why I seek out those who are better, to improve myself and hopefully, one day, to gain a high level of connection and understanding of my body. 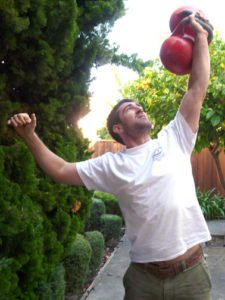