I had the outstanding opportunity to participate in two Orange Kettlebell Club (OKC) workshops this past month.  Once again John “Wild” Buckley opened his doors and his training mind and I was eager to learn.  The first workshop was the OKC basics consisting primarily of swings and presses.  The second weekend was the intermediate level, focusing on proper breathing, cleans, jerks and snatches.

I don’t like leaving my readers in the dark and disappointed for not being able to participate along with me so, once again I am taking the opportunity to pass along some of the training gems that I received.  I have divided this article into two parts for easy comprehension and digestion.  I have supplied the article with pictures, doing my best, to show the difference between two different styles (RKC and OKC).  I have not even come close to being well versed in the OKC style of kettlebell lifting so the technique pictures will not be perfect but should be enough to distinguish between the two styles.

Let’s start with the beginner level workshop review; so without further delay let’s get into the good stuff.

I could not agree with him more and this concept eludes most of us during our training times.  Moving a heavier weight with subpar technique because we can is not the right mindset for successful training and may lead to many injuries down the road.  When switching to a heavier kettlebell or adding reps or time within a set, the technique used should transition seamlessly.  I know for my current training I set the kettlebells down if my technique deteriorates and I am not able to correct it with the next rep.

The deadlift is a primary movement that transitions into the swing.  One of the best tips John gave for the deadlift is through another analogy of visualizing that your body is opening up like an umbrella; you start from the bottom (ground). At this point the umbrella is tightly closed. You then extend through your hips (as if you were expanding an umbrella to open wide) until they are underneath you and supporting your body at the top.

When the technique is successful and consistent he likes to transition into the two-arm swing by manually pushing the kettlebell into the backswing at the appropriate time.

According to John, the swing is all about patience and appropriate timing.  Kettlebell movements are all about appropriate lines and angles, when to use force and when to relax; and my personal favorite: when to be a palm tree vs. an oak tree.  During different phases of the swing you want to be able to move freely with the movement of the kettlebell like a palm tree in the wind and when you need to lock out at a particular phase of the movement you need to stabilize your body and make it unmovable, like an oak tree.

The swing is the foundation for all of the other dynamic kettlebell movements so it is important to not only perfect this technique but to refer back to practicing the movement frequently.  A proper swing allows for a more effortless movement and manipulation of the kettlebell which transfers well into more dynamic movements like the clean and snatch.

A proper swing begins with a proper grip.  John teaches more of a sport-style of kettlebell lifting where they often perform many repetitions for a single set.  For a stronger grip which decreases stress of the elbow joint and minimizes ripping of the calluses, many sport kettlebell lifters grip the bell with their fingertips.  John does note that the fingertip grip may be difficult to utilize when using very heavy kettlebells. 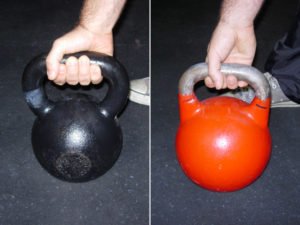 After the grip is set it’s time to learn the swing with the goal being to generate the right amount of force at the appropriate time to get the kettlebell to move upward.   To do this it is wise to become one with the kettlebell, especially on the backswing.

John provided two great tips to avoid the kettlebell traveling below the knees on the backswing:

Proper timing of the hip drive is key to generate the power to move the kettlebell upward.  Much like the deadlift, the hips extend moving the kettlebell upward and at the top the hips are forward and the legs are straight.  While performing the swing it is crucial to maintain your equilibrium and proper body alignment.  Failing to get the hips forward and underneath you puts your body out of proper alignment and when repeated over and over again you are on the road to injuryville.

One nuance with the swing that distinguishes the hard style (RKC) and the sport style (GS) is the way the styles differ in decelerating the kettlebell at the top of the swing.  The RKC style has a putting on the brakes effect where the lats lock the bell down and keep it from going any further.  In the GS style, John uses his body to lean back slightly to decelerate the upward motion.  He does this in order to not fatigue his muscles so a high number of repetitions can be achieved.  Either way you choose to decelerate at the top, the most important point is getting the hips underneath at the top to achieve proper alignment.

After numerous swings we worked on pressing and there were some greak take home points.  When you grip the kettlebell during the press, the handle will slide away from the finger tips and rest across the palm in a 45 degree angle.  Before the press the kettlebell will rack against the chest for support.  When beginning the press, drive your fingertips into the handle and begin your press.

Again understanding proper body alignment during a press is essential.  When pressing the kettlebell make sure that the kettlebell is kept directly over the hip at all times; failing to do this will lead to “instant death” as John comically puts it.  At the top of the press, much like the swing, the legs are locked, hips are forward and under the kettlebell.  John’s style has his chest slightly more forward than his hips.  He calls this the “hood ornament” position.  This position was new for me since I have been training more of the RKC style press lockout which has the chest back and the arm aligned with the hip.

Breathing was briefly discussed and would be put into practice more during the intermediate workshop.  He stated that there are basically two types of breathing and breathing is crucial in dictating the pace of your movement.  Here are the different breathing styles for kettlebell lifting:

Paradox Breathing – Exhaling on exertion.  This method is good for maximal efforts and body stability when you don’t need a lot of air.

Anatomical Breathing – Inhaling on exertion.  GS lifting requires a lot of oxygen and this method allows for a greater amount of air to be taken in which will slow the buildup of lactic acid in the muscles allowing your muscles to last longer and potentially produce more work.

I had a blast during the beginner kettlebell workshop and learned a ton from John “Wild” Buckley.  Next month I will bring you Part II of this article covering what I remember from the intermediate workshop.

In the meantime check out John’s site here: