In the first installment of this series we briefly looked at studies concerning weight training for young athletes and the potential risk associated with it.  In the second article I explained some of the double leg progressions that I use with my athletes that minimizes the risk of injury and decreases the stress placed on the spine of the growing athlete.

In this installment I want to focus on single leg movements that I use with the kettlebells.  I have seen plenty of strength programs that focus too much on double leg movements; like squats, deadlifts and power cleans.  These exercises are great for increasing strength and power production quickly, however, neglecting single leg work is doing an athlete a huge disservice.

The benefits of single leg work are tremendous.  Most sport movements use the legs independently; running, cutting and bounding are all done off the single leg.  If you only train double leg movements there is no way of truly knowing how the legs compare in strength and stability between each other.  If your right leg is much stronger, more stable and has more appropriate flexibility, when you need to use the left leg to perform a high level movement you may not be able to perform the movement, or even worse, you could sustain and injury because it was not capable of performing the movement you needed to do.

One of the most common and effective single leg movements is the lunge variation.  Many of these movements can be done with dumbbells or other weights but the kettlebells offer a few more intermittent variations that can help the young athlete progress successfully.  I am not going to deconstruct the lunge and all of its variant movements, just note there are several movement variations like the stating lunge, forward lunge, reverse lunge, bench split lunges,  etc.

One of the first variations I use is the Low Kettlebell Lunge usually starting with one kettlebell in each hand.  The kettlebells are easy to hold and using two generally makes the movement more stable.  As the athlete masters that movement with showing appropriate levels of strength and stability you can challenge the anti-rotational stability much more by using only one kettlebell for the same movement.  The single kettlebell will pull the athlete toward the side of the weight therefore increasing the need for strength and stability of the legs and core muscles to resist the weight pulling you off-line. 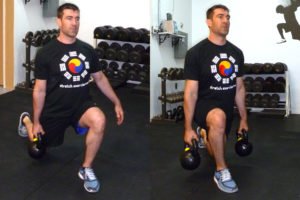 Taking the lunge to the next level is a variation that cannot be done comfortably using dumbbells and that is why kettlebells are ideal for these movements.  The Racked Kettlebell Lunge is a great challenge for stability and core strength.  I usually start out with the single kettlebell version because it is slightly less demanding on the core stability.  Find a place for the kettlebell to sit well against the upper body.  I tell my athletes to allow the weight become part of your body.  For safety reasons you want to keep the kettlebell as close to the body as possible and centered over your hips.  During the descent the kettlebell will want to pull you out to the side of the kettlebell and forward.  Leg and core strength and stability are key in making the movement successful and beneficial to the athlete.

The double racked kettlebell version is one of the hardest versions I have encountered primarily due to the amount of the demand it places on the core muscles of the body.  During the descent the heavy weight will want to pull the body forward so it is important to keep the core muscles strong so the body stays upright and stable.  The double racked kettlebell lunges also challenges the breathing because the bells are racked on the chest not allowing the chest to expand to take a normal breath. 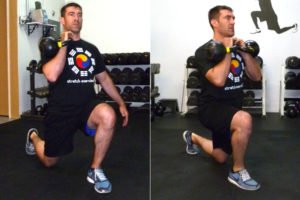 The last lunge version I will discuss is the Overhead Kettlebell Lunge.  This movement can be done with a dumbbell, however, I prefer the kettlebell because of the weight displacement.  Unlike the dumbbell, the kettlebell weight conforms to the body and sits in a direct line over the hip making the weight easier to keep in line and therefore minimizes the risk of stress on the shoulder joint.

Start with the single overhead kettlebell lunge, the leg position is entirely up to the strength coach and it may be a good idea to alternate which legs are forward or back during your training.  When performing this movement it is very important to keep the shoulder sucked into the socket and keep the weight in-line with the arm and the hip.

If you need to make this movement really challenging for the athlete then add the second kettlebell and use the same principles of execution. 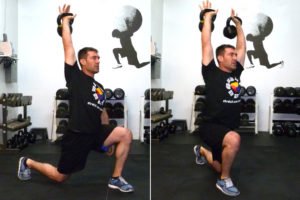 Single leg movements should not be ignored when helping the athlete to build the strongest and highest performing self that they can be for their sport.  Give these variations a shot and let me know what you think.