In the first installment of this series we briefly looked at studies concerning weight training for young athletes and the potential risk associated with it.  Though the notion of strength training itself was not seen as potentially dangerous, implementing improper protocols and exercise selections may have negative effects on the growth of the body and may increase the chance of injury.  I have also found that upon creating proper training programs for young athletes the use of kettlebells is extremely advantageous for teaching proper set up and lifting mechanics used in major lifts.  In many cases kettlebells are much easier and safer to progress than using the traditional bars and dumbbells. 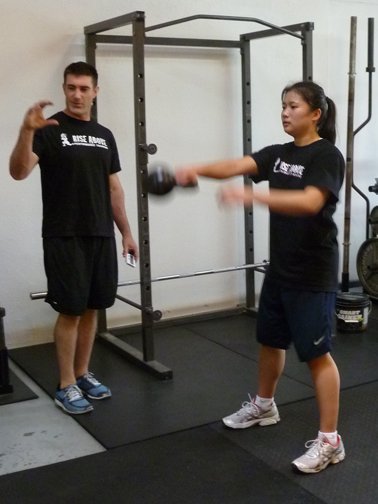 In this second half of the series I will highlight some of the advantages that the kettlebells have over bars and dumbbells especially when it comes to progression of the exercises.

The first installment explained how the kettlebell deadlift is essential for training hip extension and how it could be much safer to implement than a traditional barbell deadlift because it is much easier to set up and execute with proper technique.  Once the technique is mastered and executed with the weight the trainer has established as the goal, then small variations of the movement can be used to further enhance strength gains.

The Single Arm Alternating Deadlift is executed like the standard kettlebell deadlift but uses only one arm at a time and switches at the top.  The challenges come with maintaining proper body alignment by keeping the shoulder back and chest up.  Also, on the single side there may be an urge to shift body weight to the side of the kettlebell and the athlete should not allow for this.  The single arm alternating deadlift forces the athlete to completely activate the core muscles to resist this shift and maintain proper body alignment.  Lastly, the individual grip strength is trained.  Grip is usually much stronger on one side compared to the other side.  By only using one arm to maintain the kettlebell in proper position it is possible to focus entirely on the one arm for the given repetition and the other on the next, in order to narrow the strength deficit between the two arms.

After the young athlete’s technique is stable and consistent you may find that the kettlebell may become too light to elicit a proper training effect for the athlete.  Most kettlebells only reach around the 100lbs. mark; but instead of jumping directly into the barbell version of the lift, the strength coach may opt for one more variation before.  The Double Kettlebell Deadlift is great for the young athletes whose technique has become solid and their strength is progressing.  This variation offers all of the benefits of the other kettlebell deadlift variations; being able to keep the weight very close to the body for the initial set up, training each arm (grip) individually allowing for balancing out the sides all the while being able to increase the weight to a fairly heavy level.  Once the athlete is able to perform this variation with weight totaling around 135lbs. successfully then they can consider the barbell deadlift. 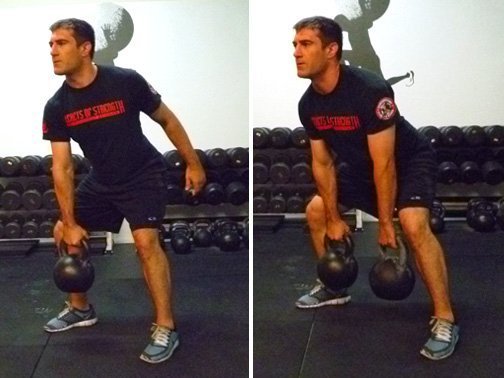 As discussed in the first installment, the squat is a very important exercise for athletes to improve core and hip strength, however a traditional barbell squat calls for loading the bar and placing it on the back of the athlete which increases the risk of injury to the less experienced lifter and also may compress the spine.  After mastering the bodyweight squat using kettlebells, the kettlebell goblet squat is the next step in the training process.

After the athlete gains experience in the standard kettlebell goblet squat, like we explained in the first article, the movement can be altered to take it to the next level.  Double Kettlebell Front Squats simulates a barbell front squat without having the athlete hold the barbell in the initially awkward fashion.  Using two kettlebells allows for an increase of weight used which can enhance strength gains and it also challenges the core muscles which must be engaged fully to maintain proper body alignment during the execution of the movement.

The Single Kettlebell Front Squat is another great option for young athletes, which is similar to the double front squat version, however when using a single kettlebell racked on one side of the body there is a much greater need to focus on proper technique and balance between the two sides of the body.  The single kettlebell will not only pull the chest down and forward, it wants to cause a shift towards the side of the body where the weight is.  The athlete must counter this motion and keep the chest up and the weight distribution equal on both legs. 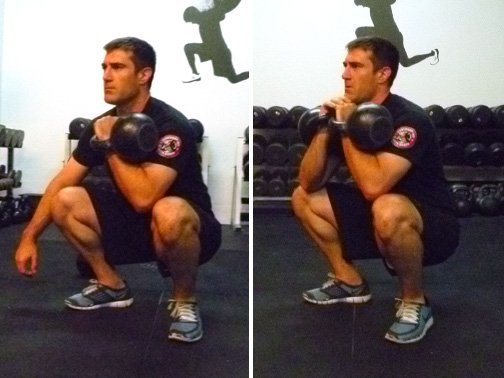 We established the kettlebell 2-arm swing as an excellent alternative for Olympic lifting for the young athlete to improve hip drive and power.  When the 2-arm swing technique has become consistent, then swing variations can be introduced.

The 1-Arm Kettlebell Swing is performed the same way as the 2-arm version, however the single arm version will stress the grip on the working side much more.  It is also a useful movement to balance out the strength and movement coordination between sides.  Usually one side of the body will be stronger and more coordinated and this will be quickly evident when performing this movement.  When executing this movement I recommend to swing the free arm along with the kettlebell side which helps maintain the shoulder in their proper position and also facilitates easy transition to the next variation, the alternating swing. 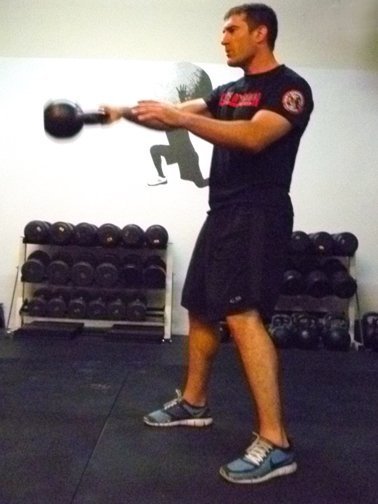 In the Alternating Kettlebell Swing the athlete will be switching hands.  This allows the athlete to increase their coordination and their work capacity as they begin to get fatigued in one arm, they can switch to the other side and keep the movement going.  The frequency of the hand switch is only limited by the coach’s imagination.  If you want the athlete to train strength and coordination you can have the athlete go heavier and for shorter duration.  If you are training the conditioning of the athlete, keep the weight lighter and switch hands every few repetitions.

Once the young athlete has mastered the basic kettlebell movements these above variations allow for safe progression in programming.  In the third part of this installment, I will go into some of the variations of the single sided movements that kettlebells have to offer.