By now most fitness enthusiasts have seen a kettlebell and used them during training.  Their versatility and conditioning power are virtually unmatched when compared to many other pieces of training equipment.  I use kettlebells in nearly every single one of my athlete’s training protocols.  Although the power production and conditioning aspect are the primary reasons why I learned how to train with kettlebells, I have also found one other advantage with them; kettlebells are great for teaching young athletes proper set up and lifting mechanics of the major lifts.

In many cases I have found kettlebells to be much easier, safer and progressive to lift with than using the traditional bar and dumbbells.  In this article I will address the concerns parents may have with children lifting, the reasons why I choose certain movements and the progression to make during training. 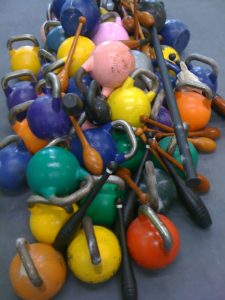 Is Lifting Bad for Kids; Will Lifting Stunt their Growth?

There is no real direct way to answer this question other than Yes and No.  Obviously, it is not in the best interest of the young athlete, who has just turned the corner on puberty, with no training experience, to get under a bar, load it up with weight and have them squat it.  If they don’t hurt themselves on the first set then they should consider themselves lucky.  Repeated measures most certainly will lead to trouble down the road.

Research shows that a properly designed program “has a favorable influence on body composition, bone health, and reduction of sports-related injuries”

It is in the best interest of the trainer and young athlete to get a hold of the proper technique using their bodyweight initially, but there must be safe progression to allow for strength gains without jeopardizing one’s health.  With their shape and marginal weight increments, the kettlebells provide the athlete with this progression.

The deadlift is a highly effective movement to train the hips to extend.  Most sports are dependent on the athlete’s ability to extend their hips, whether it is to sprint, change direction or jump.  Being able to move and accelerate and object from the ground using one’s hips leads to great strength and power development essential in sports.

The problem with deadlifting is that it is usually done with a bar which makes the task of proper set up and execution a bit challenging for the young athlete.  The bar sits low on the ground and in front of the athlete.  The proper mechanics of sitting the hips back, grabbing the bar, locking the shoulders back to prevent rounding of the upper back, tightening the stomach, driving through the heels while keeping the bar close to the shins is a very tough task for younger athletes.

With the kettlebell, some of the biggest differences make the movement much safer for the young athlete to learn.  Kettlebell weight can start small and progress in small increments.  Your college-bound football player would probably laugh at the thought of deadlifting the heaviest of kettlebells, but for a Jr. High athlete who is just learning, the weight is perfect.  A standard Olympic bar weighing in at 45lbs. is probably too much for the rookie trainee, but take a 18-25lbs. kettlebell and it will be perfect.

The positioning of the bar in the traditional deadlift sits in front of the body close to the shins.  Properly grabbing the bar and pulling oneself into accurate position to begin the pull is very difficult for a new lifter.  If the stomach is not tense and the upperback not retracted, the pull will be disastrous and low back problems are most certain for the future if the practice is kept up.

In contrast, the kettlebell is positioned directly between the knees and ankles to perform a deadlift.  When the athlete sits back into position, it is much easier to grab the kettlebell while maintaining the safe, shoulder retracted position.

Much like the deadlift, the squat primarily trains the hips with the difference being, that in the squat there is an eccentric component that causes a stretch of the muscles that initiates the upward drive.  If you have an athlete that has mastered his bodyweight squat, great! But what is next?  Loading an Olympic bar on their back?  That might not be best for the spine.  Performing front squats with the Olympic bar might not load the spine as much, however, even with the two grip variations, the front squat can be difficult to perform especially without proper core strength and stability since the weight wants to pull the body forward.  There is also the overhead squat but this one takes practice and a lot of mobility of the shoulders and upperback; again maybe not the best for beginning lifter.

Which that all said, enter the kettlebell squat (or goblet squat).  The kettlebell squat is the ideal progression for young athletes.  There is hardly any spinal compression and the weight sits perfectly close to the chest with the arms resting right along the rib cage.

With Olympic bars weighing 45lbs. alone, it is much easier to start with the kettlebell because they come in smaller weight sizes.  Likewise, the small increment jumps in kettlebell weight makes the squat progression seamless.

After the young athletes have displayed proficiency in the bodyweight squats and progressed successfully by adding some resistance, the time might be right to add some dynamic movements into the program.  Many strength and conditioning coaches tout the use of Olympic lifts (clean and snatch) to train the power element of sports; while these lifts may be great for power generation, ask the same coaches who push the movements whether they are easy to learn and most of them would say “no.”

Enter the kettlebell 2-arm swing.  The kettlebell swing is much easier to learn than Olympic lifting and targets a powerful hip drive that is coveted in sporting movements.  Not too many sports require and athlete to have one all-out-explosive movement that the Olympic lifts train; the swing allows for a little more versatility in its effect.  A beginning athlete may do sets of 10 reps to get the feel for the technique and the movement.  A more experienced athlete could replicate their sport more closely by doing timed intervals.  Sports like soccer and basketball are a series of repeated sprints and stops.  Performing a Tabata protocol (20sec of work, 10sec of rest) with the kettlebell swing not only trains the explosive hip power but the strength endurance required to perform repeated bouts of sprints required for their sport, another aspect that Olympic lifting does not target.

The key for young athletes to build a strong foundation of strength that will carry over to improved sports performance requires mastering the basics and then gradually progressing.  The kettlebell is a great tool for doing so.  In the second part of this installment, I will go deeper into more of the movement variations that kettlebells have to offer.