On Sunday May 2nd I had the wonderful opportunity to attend a seminar put on by Laree Draper of Dave Draper.com Not only did it have three great RKC Kettlebell instructors, Dave Whitley and Mark and Tracy Reifkind, lunch and a DVD of the event was included and it was all right in my own backyard.

Now don’t kick yourself too hard for not attending because I am going to filter through my numerous pages of notes and present you with the wisdom passed down from these three great coaches.  So sit back and let’s get ready to learn.

If you have been following the iron game for a while, then the name Dave Whitley (aka The Iron Tamer) should come as no surprise to you.  I was very excited to meet and learn from Dave because this was going to be my first opportunity to do so, and he didn’t disappoint.  For those of you who don’t know Dave, he went from his early years as a KFC employee to being Master Level RCK instructor and Old Time Strongman performer; and what a performer he is.

Dave’s morning session consisted of performing several feats of strength from the classics such as, card tearing and horseshoe and nail bending to two feats I have never seen before live which left the crowd speechless; rolling up a frying pan into, what he calls, a Redneck Hotdog Cooker, and performing a Turkish Get Up with a kettlebell while leveraging a sledgehammer.

Dave related these feats of strength into lessons we could learn from Old time Strongman training.  According to Dave, the two basic principles for getting stronger are:

Dave states that, “Strength is practice.  If you practice poorly the result is poor movement.  Movement is King.  Adding strength to a dysfunctional movement pattern will add to the dysfunction.”

Progressive overload is simply doing more over time.  Dave explains this is best achieved through:

Dave later applied the first principle of strength and explained how to use the second during our afternoon session when he completely dissected our get-ups and touched on the windmill and bent press.

Where feats of strength are concerned, Dave states that isometrics are missing from too many training programs.  His gave an example if one could not bend a certain grade of steel it is useful to try and bend it anyway.  This helps apply proper execution of strength in certain positions during the bend.  Working on the set up and generating strength tension in a proper set up will eventually help get those bigger bends.

For more information on Dave and his philosophies on strength, check out his website at Irontamer.com

At this seminar we had to earn our lunch and to do this we had to pass a workout concocted by the Queen of the Kettlebell Swing, Tracy Reifkind, RKC.  Tracy first told us of her kettlebell origins from simply using the swings to incorporate into a weight loss routine for herself and then it turned into an obsession.  She not only performs numerous swing sets for over an hour during her own training, she has formulated a system to get her clients to progress towards the same thing.

After her introduction, we briefly went over the 2-hand swing, 1-hand swing, and how to alternate hands during the swing.  She then went into how to perform a certain number of repetitions during a designated time interval.  If we needed to get 12 reps in 15 seconds of work we were taught how to lock down our lats and reverse the kettlebell safely into the backswing to get the next rep done quickly.

After her crash course, we grabbed our kettlebell and we were off.  2-hand swing ladders consisting of a determined amount or reps over 15 seconds of work and then 15 seconds of rest.  We then mixed it up with 2-hand and alternating hand swings, trying to get a certain number of reps for time.  At the end of the 50 minute workout, many of us were toast and every one of us did not smell so good.

Despite how difficult it sounds to perform, Tracy continued to emphasize her main point which is simple, “Do what you can.”  With this type of program she can train several people at once even if they are at different ability levels.  If you only get a few reps during a certain time interval, then you stop; if you are tired, sit one out.  Everyone is always in the same workout and it’s easy to track your progression (remember what Dave Whitley said), when you add more reps, sit less work reps out, and loose some body fat the positive progression is on!

If anyone can talk about the Lats; The Super Muscle, for an hour and a half and make it sound interesting it’s going to be Master RKC Mark Reifkind.  To quote Dave Whitley “Mark has forgotten more information than I have ever learned.”  After hearing Mark speak for a few moments you realize this is true.

Mark stated that, “All movement of the body is done through the intricate connections and interactions of muscles.”  By just looking at the various origins and insertion of the lat muscle you can easily see why he calls it “the bridge between many joints.”  Though the muscle is readily used in so much of our human movement, he states that, “It is very hard to activate.”

Mark gave us several drills and cues helping us to activate and utilize our lats for different moments for superior strength increases.

Deadlift – Lats help increase strength by locking down the upper body when they are close to the body drawing the shoulders back and the chest up.

Kettlebell Swings – Lats are responsible for optimal kettlebell control.  If you do not use them, by connecting them to the body during the backswing, or locking them down at the top of the swing, moving a kettlebell through the swim motion properly is not going to happen.

Perhaps the most obvious case for poor lat activation comes during the kettlebell press, yes the press.  Mark emphasizes that if someone were to press a heavy kettlebell for one repetition, they best learn how to engage their lats or, most likely, they will not get the weight up.  Some of Mark’s keys to getting the lats to aid your press after a good clean are;

I can’t say enough good things about the equality of instruction that Mark Reifkind delivers.  Check out Mark’s site here

If you really want to learn from great kettlebell instructors I suggest you seek these three people out.  I am glad I took this opportunity to learn from them and I walked away a better instructor than when I walked in. 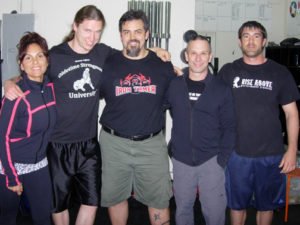