At the end of last year I was fortunate to host a Level 1 RKC kettlebell certification at my gym for the first time. I was not only excited to bring the most detailed kettlebell certification to my area allowing a brand new batch of people get the RKC experience, I was also excited to hone my RKC skills by learning from a Master RKC and also being an assistant RKC instructor for a new bath or eager candidates.

Our head instructor was Keira Newton, who has years of RKC kettlebell experience and is dedicated to proper movement and technique. The new RKC candidates could not have asked for a better leader nor could I have asked for a better teacher, who has a put in many hours instructing clients in the way of the hard style kettlebell system. She has seen and taught all the styles and surely I knew she would have some innovative ways to get people performing the movements with efficiency and ease; and I was not disappointed.

Remaining simple and concise with instruction is the key to success and Keira has provided me with some new ways to tackle the common frustrations with kettlebell training hopefully making them easier for the students to learn. In this article and in the video tutorial I will pass what I learned on to you to make your training a little bit easier.

Hands down the hardest concept to internalize when learning the kettlebell swing is the proper timing of the swing, especially during the backswing. With the swing movement being foreign to even the most experienced of athletes; getting the correct timing can take a while, however you do not want your student performing the swing with incorrect timing for too long because it could quickly lead to an injury due to its ballistic nature.

Proper swing timing sees the kettlebell getting very close to the body before the hips hinge which has the kettlebell traveling back well above the knees. Most new students tend to hinge at the hips immediately following the apex of the swing as soon as the kettlebell begins its decent. This will put the bell out of the ideal position, below the knees, in the backswing which limits power output of the movement and also changes the natural trajectory of the kettlebell from backward to more of a downward motion which pulls on the lower back.

In the past the proper swing timing has been challenging for the individual to learn because it is one thing to hear the corrective instruction and another to perform it. I used to say things like wait in the backswing or jokingly let the bell almost hit you in a very bad place before you hinge. One cue that gave me the most success was keep the kettlebell above the knees during the backswing, but this still did not work for many of my clients that I had anticipated and I usually had to cycle between the three until one of them worked.

Keira had two more cues that I found to be really successful with the RKC candidates and they are very visual in nature that is most likely why they are so successful in learning a proper swing quickly.

Another cue I liked that was a bit more conceptual was to have the student visualize a triangle where the base ran between their knees and the apex was at the top near their pelvis. Keira would cue that the kettlebell should be at the top of the triangle in the backswing. If the student was aware where the top of the triangle was on their body relative to the kettlebell then they seemed to pick up on this cue rather quickly. 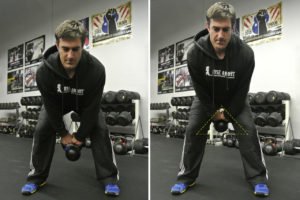 Cleaning up the Cleans

As a kettlebell instructor for many years now, I have found the clean to be the most difficult of movements to learn because the upper arm does not extend like the other swing movement which makes it hard to pattern and smooth out.

In the beginning most students will muscle the bell too much by letting the upper arm get away from them and then doing a ballistic bicep curl to get it into the rack position. This posed a problem; not only from a potential injury standpoint, but muscling a kettlebell up will only get a person so far until they meet a weight they cannot rack with this improper technique.

Keira’s gunslinger cue took good care of this issue. If you have ever seen an old western movie where two cowboys squared off in a duel then you will be familiar with a gunslinger motion where the upper arm stays close the body and retracts the kettlebell with the shoulder blade to get it into the racked position.

Like the western gunslinger, this is the quickest and most efficient way to get the object, in our case the kettlebell, up and into the proper position.

If students are still muscling up the kettlebell you might see them pulling the bell up higher than necessary where it travels slightly higher than the shoulder then drops and settles in the rack position. Doing it this way for too many reps will almost guarantee a very sore shoulder after a few repetitions. 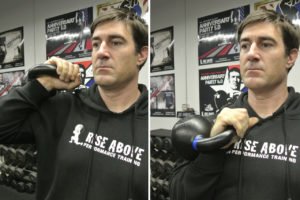 Cueing to bring the thumb to the collarbone gives the student a marker on the body as to where to target the landing of the kettlebell into the proper position. This cue helped to smooth out the transition from the swing into the rack position and allowed for smoother finishes and happier shoulders.

There you have it a few tips and cues for the swings and cleans to help you hone your skills as a kettlebell trainee and instructor.

For further explanation of the progressions above check out the video below: