The Squat: this exercise is a staple in sports performance training because it can be used to perform many athletic movements which require strength, speed, jumping ability and force absorption by training our potentially powerful hips. It can be used as a remedial or warm up exercise when done using bodyweight only and as a strength builder when performed with various external loads including dumbbells, kettlebells and barbells.

The movement of the squat is a pattern that is engrained in all of us human beings which toddlers naturally default to when observing and attempting to pick up objects off the ground.

Ironically, as we age, this movement tends to allude many of us to the point where we cannot perform it all together therefore increasing the tightness of our hip joints and its musculature. This not only zaps our power prediction capability but can potentially set us up for potential injuries down the road if we display compensating movement patterns which are less efficient and potentially more dangerous to load, like bending our backs to pick up an object.

I use the squat and its variations in many of my strength and conditioning programs initially as an assessment tool to see if the movement pattern can be properly executed and at an appropriate depth (minimum depth being the top of the thighs parallel to the floor). Once the assessment is made I can decide at what stage I can utilize the squat within the athlete’s program.

If the athlete is showing complete lack of form I will begin with more remedial exercises, emphasizing proper muscle activation and movement pattern execution. From there we can use a variation appropriate for the athletes’ age, experience, ability and goals.

One of the more common elements in a poor squat is the lack of proper muscle activation i.e. glute muscle activation which allows for proper loading and hip extension necessary for successful completion of the squat. Using the glute muscles instead of solely relying on your quadriceps is a much safer and stronger squat because it shifts the emphasis towards hip extension rather than knee extension.

When an athlete does not use their hip muscles to squat you will generally see them shooting their knees forward excessively during the descent and then pull them back underneath them to return to standing.

A simple lying hip bridge can isolate the activation of the hips because the athlete’s body is supported by the floor so they do not have to concern themselves with completely stabilizing their movement. They simply need to have minimal stability on the floor and squeeze their glutes to extend their hips to the top position. 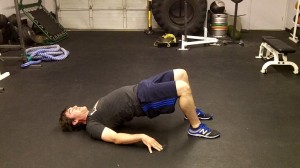 I like band walks for the many athletes that collapse their knees inward. Valgus collapse is very common due to either weakness or imbalance in the quad muscles and or poor movement pattern. And uncontrolled valgus collapse under load whether it is from a weighted squat or landing during a jump can cause severe stress on the knee joints and may lead to a severe knee injury down the road.

Mini band walks can teach the athlete to step into a squat stance, squat and focus on keeping proper knee alignment while doing so. 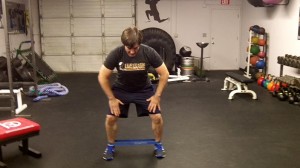 This is not the powerlifting version of the movement; I like to use the box squat as a guide for athletes who have trouble sitting back into a squat to get the proper body alignment and to get their hips involved.

Again there is a tendency for athletes to shoot their knees too far forward and lift their heels off the ground while they are performing this movement which does not utilize glute activation and can compromise safety of the joints during the movement.

The box acts as a location goal to reach while performing the squat. You can adjust the height of the box and lower it as the athlete becomes more confident in the movement and shows more mobility in the hips. 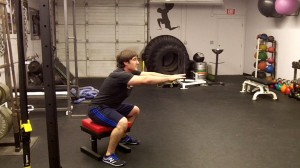 Make sure to cue your athlete to sit about 1/3 of their weight on the box so they do not dive bomb towards it and simply rest in the bottom position and stand back up. Our goal is to get them to the free standing squat so we have to make it is close to that as possible. Relying on the support of the box too much will be difficult to override when the athlete begins to progress to free standing squats.

This is usually the final step in my squat progression before the athlete is ready to spread their wings and fly with the free standing, weighted squat. Using a free standing post from a rack have the athlete finds their squat position and squat down.

The post should be a few inches behind them so as they squat their hips lightly through the post and they can guide themselves downward. As they get better with the movement pattern ask them to simply step away from the post until they are free squatting normally. 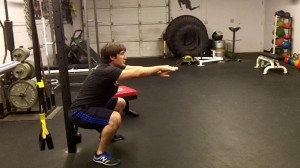 There you have a few ways to progress your squat pattern to get you to the weighted version. Remember to practice the movement pattern frequently to get it ingrained so your weighted free standing squats are smooth and strong.  Check out the video below for a visual demonstration of the progressions mentioned in this article.