I would not consider myself a procrastinator because in my mind I believe I have so much going on that I need a pressure deadline to accomplish something that I want to get done.  I have always been that way with school, work, this newsletter and sometimes competition.

When my friends of the Orange Kettlebell Club invited me to check out their Bay Area kettlebell competition I saw that they had a five minute, multiple hand switch kettlebell snatch event with the 24kg.  This event was more up my alley compared to the other GS Kettlebell events, because I have not quite worked my way up to a ten minute set with only one switch with an acceptable weight.  Besides I am more of a go all out kind of person anyway.

After making some calendar adjustments and committing to the event I realized I only had two weeks to truly prepare so I would not make myself look completely silly in front of these great kettlebell athletes.  I realized I had to cram again.

I am going to be honest and tell you that I usually have a pretty good baseline for kettlebell work.  I tend to train them twice a week and I snatch about every other week.  I have not been doing long, timed sets in a while as I was currently going heavier for repetitions.

First thing first, I had to see where I was initially; I did a 5 minute set with the 24kg.  The set did not feel great and I got 100 repetitions.  The reps were lower than I had expected but it was a start.

After the baseline trial I decided I needed to cram for this event big-time.  I would continue with my normal training schedule but my two kettlebell days would consist of snatching.

I also decided that I wanted to make the 24kg kettlebell feel as light as possible so during my training I was not going to touch the 24kg, instead I was going to use kettlebells that were heavier.

With only two weeks to train I constructed a total of four workouts like this:

Workout 1: 5 minute test with the 24kg.  I completed one hundred repetitions and the realized that I needed more focus and cardiovascular training.

Workout 2: 30 seconds of work getting as many snatches as possible on one arm then resting 30 seconds and then moving to the other arm.  I did this for a total of five rounds with each arm equaling 5 minutes of total work.  I used the 32kg and averaged 10 repetitions on each arm.

Workout 3:  6 rounds starting with 1 minute of jump rope, rested 30 seconds and then 30 seconds of kettlebell snatches with the 32kg on one arm (a crazy workout that focused on conditioning and not much on kettlebell speed.  I switched the arm each round so I did three rounds of snatches for each arm).

Workout 4:  If you thought the last workout was bad this one nearly did me in, fortunately I had the common sense to use the 28kg instead of the 32kg.  I brought my kettlebell to the local track and did a 200 yard build sprint at about 85% speed.  Immediately after the run I performed 10 snatches on each arm.  I rested one minute and repeated this sequence for 5 total rounds.

After completing the above rounds I finished with a 100 yard overhead farmer walk completing it one time on each arm.  This workout was by far the most challenging of the bunch but upon completing this I felt I was ready for the competition. 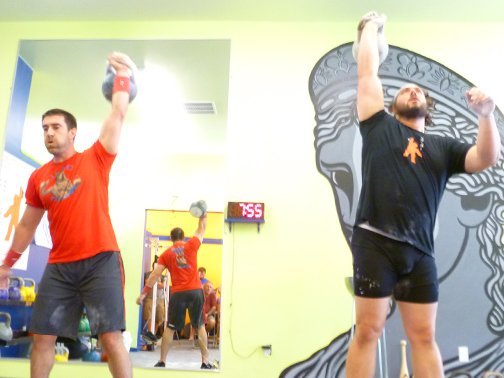 The day of the competition was great.  I was able to recruit one person from the gym to compete as well so misery does love its company.  I had a game plan for doing 120 total repetitions by performing 25 repetitions on each hand and knocking out the first 100 repetitions as fast as I could and then seeing where I could take it from there.

John Wild Buckley threw a small wrench in the system by saying he thought I should be able to get 136 reps like he did in a competition.  John is a great guy and meant it with the best of intentions but that number was messing with me.

I went out and went out fast, a little too fast.  I sacrificed some technique and gripped the kettlebell too tight for too long and tore my hands up pretty good, however I am not complaining because I was able to knock out 128 repetitions during the competition.  I beat the number I wanted to get by eight repetitions and I also gained 28 total receptions over my baseline test from two weeks and four snatch workouts prior.

Of course me being a perfectionist and never satisfied I thought I not only could have gotten those 136 repetitions but I was upset that I tore up my hands by letting my technique suffer a bit.  After watching the video I realized that some of my lockouts were not close enough to my head because I was trying to go too fast.

However the day was great and the best part was that I was able to share in this event with a great kettlebell crew and I got to lift right next to John Wild Buckley, a true honor. 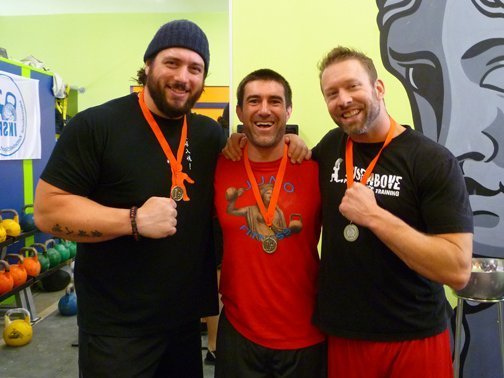 If you want to see me in action, check out the video here:

Also, if you want to see something really impressive, check out the of Debra from the gym nailing 142 repetitions with the 12kg.  I was blown away:

Next time I should get her to write up her training program.