Every athlete who walks through my door might think that they are going to come in, lie down on a bench and press a bar for a few sets of eight and then maybe some bicep curls while staring at themselves in the mirror and so on; but this is not really the case.  Before we go through any types of strength movements we have to see what we are dealing with.  Are there any mobility issues, strength imbalances or flexibility concerns that need to be addressed for optimal health and future performance; for most people the answer is yes.

One of the most common problems I see is that lack of optimal hamstring flexibility, especially among younger male athletes.  Poor hamstring flexibility, over time, potentially leads to reduced athletic performance, future tears in the muscle and surrounding muscles and excessive low back pain and tightness.  One study by Henderson et al. concluded that the risk factors for injury increase with age.  In their study of English Premier League Football (soccer) players they concluded that, “Older, more powerful and less flexible soccer players are at greater risk of sustaining a hamstring injury.”

In this article I will show you how to assess hamstring flexibility and some tactics to increase and maintain proper hamstring length and function.

Assess Yourself before you Wreck Yourself

Hamstring assessment is very easy to establish.  There are several different tests that can be implemented but one test should be sufficient.  Kendall suggests using the Straight Leg Raising Test.  To perform this test lie on your back on a table or ground with your legs straight and sacrum flat.  Keeping one leg straight and the low back down, raise one leg up keeping the knee straight.  An angle of approximately 80-90 degrees between the table and the raised leg is considered normal, anything less is considered abnormal.

It is important to monitor the low back position during the raising of the leg because if the hamstring or surrounding musculature are tight they can cause the pelvis and low back to move to create a false positive test.

You Need Some Work, Now What?

Let’s assume that you or one of your athletes has a less than stellar straight leg test and need to get their hamstrings in check before they get into the discomfort zone.  Frequent foam rolling of the hamstrings and the surrounding muscles can improve tissue length and quality.  I also recommend that when you foam roll, you try three different positions; in leg internal rotation, neutral and in leg external rotation.  The hamstring group consists of four muscles (semitendinosus, semimembranosus, biceps femoris long & short head) each having their own origins and insertions and making it possible for one particular muscle to be shorter than another. 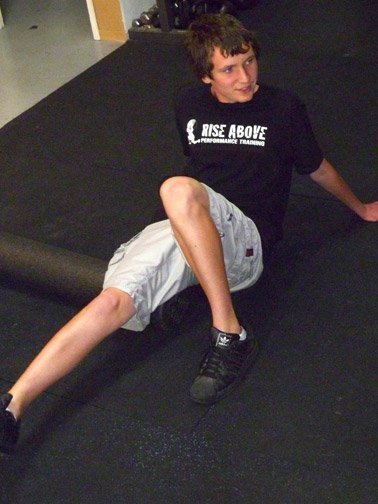 This may sound simple but adding the proper exercises into the strength and conditioning program is a huge asset when trying to gain optimal length of a particular muscle group.  For the hamstrings, almost any correctly performed leg movement can be a corrective exercise, however it is probably in your best interest to perform these movements with your bodyweight alone adding them in the beginning of your program or intermittently throughout.

Supine straight leg raises, high knee walks, cradle walks, single leg RDLs, and lunge variations in different directions are great ways to increase range of motion within the hamstrings and surrounding muscles.  Keep the movements within their full range, vary the direction and movements themselves, repeat frequently and keep the load at body weight or very light and your legs will be loose in no time.

One final component is the dreaded “s-word” STRETCHING.  According to Physical therapist Kelly Starrett of San Francisco Crossfit;

Stretching is critical and needs to be done frequently for optimum results.  I like to stretch my hamstrings by lying on my back and using a strap for leverage.  Once I set my end range position without straining I then begin to contract my thigh muscles and hold the contraction for a few seconds and then release the muscles along with my breath and gain a few more degrees in the range of motion.

If people do stretch at all during the day it is usually only done for a minimal amount of time, usually too short to be deemed effective.  Again, Starrett suggests that:

“One session of stretching lasting one minute isn’t going to change anything.  Stretching big muscles like hamstrings and quads takes time.  Ninety seconds per leg should be a baseline, five or six times a day.”

There you have it, some surefire ways to get your hamstring in shape.  With a little discipline and diligence you too can have hamstrings that are ready to perform whatever task you ask them too..