It’s been four years and I am proud to have been a participant all four years running and to see this event grow each year.

If you do not know the history behind the event, Jason Dolby of the Orange Kettlebell Club (OKC) decided four years ago that he wanted to celebrate his birthday in epic fashion by combining three things he loves most in this world: lifting kettlebells, his friends and family and helping out those who need it most. 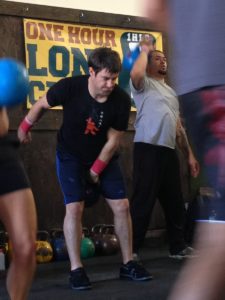 The First Long Cycle charity event was held in Southern California and hosted 19 lifters to support Children’s Hospital in Los Angeles.  The event was a success with records being broken by Sergey Rachinskiy who completed 915 repetitions with a 24kg kettlebell and Jason Dolby, himself, completing 262 repetitions with two 20kg kettlebells.

None of us realized how much these humble roots would spread in years to follow.

The Second Annual One Hour Long Cycle Event was bigger than the first with 38 participants including recreational kettlebell lifters and record setting world champions.  This event was personal because one of the OKC’s own, Nazo, was trapped in Japan for months after the tsunami and she wrote a very heartfelt blog post about the experience; read her post here. The event proved to be a huge success again and it would only get bigger from there.

The Third Annual One Hour Long Cycle Event was the first year the event left California and hosted in Seattle Washington.  Not only was the location change marking a new first for this event this was also the first time lifters could participate in a team relay fashion or lift from a satellite location.  In Seattle alone there were 60 relay lifters and 12 solo lifters and we had many more in satellite locations including: New York, Colorado, Los Angeles, Japan and Singapore.  With the addition of the relay teams and the satellite locations the event grew tremendously and they were also able to raise much more money for the Tuberous Sclerosis Alliance which conducts research to find a cure for Tuberous Sclerosis Complex (TSC).

This fourth year brought us back down to Southern California at Innovative Results with about 30 lifters participating at the main location and over 200 lifters at 30 satellite lifting locations worldwide.  This year Jason decided to raise money for the Jimmy V Foundation in the memory of Jason’s brother’s best friend James Chang who lost a battle with cancer earlier this year. 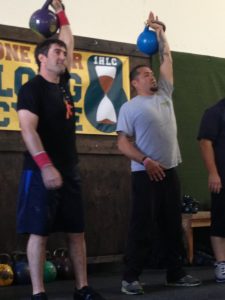 Jason not only wanted to make this the biggest kettlebell charity event to date he also wanted to tackle a huge challenge and do something no one else had ever done before: long cycle with two 24kg (53lbs.) kettlebells for one hour; Jason succeeded in both.  This was the biggest long cycle charity event to date and he made it through the hour using every ounce of physical and mental strength he had completing 154 repetitions and shaking off the ghost of defeat.

You can watch Jason in the video below.  I recommend that you watch the beginning, minutes 33-35 and the last minute at 1:01 and you will see a man determined and a person who refuses to quit.

One again I feel blessed to have witnessed history and having been a part of this whole event, however I am more proud of the support we received from Rise Above Performance Training.  You all came through and helped raise over one thousand dollars to help support the Jimmy V Foundation.  I want to thank you all for your support and generosity towards this cause.

I cannot wait until next year to participate in the event again and I hope you all consider joining me in lifting for a cause too.