This past month I did three consecutive weekends of speaking workshops and I covered a few topics relating to enhancement of athletic performance with the use of strength and conditioning programs, kettlebells and sports nutrition.

During the sports nutrition presentation I covered the basics of optimal eating for not only increasing athletic performance but to also build a healthy body.  I stressed that eating properly for optimal health was the most important aspect to focus on when thinking about nutrition. I kept it simple: veggies, protein, proper fats, the right carbs and water consumption.  I tried to touch upon all of those topics along with examples of high quality sources and the proper amount range they should be taking.  All of the athletes and coaches seemed to come away with a greater understanding of sports nutrition.  I also noticed that a recurrent question would come up in my discussions that I neglected to talk about during my presentation, What about soy? 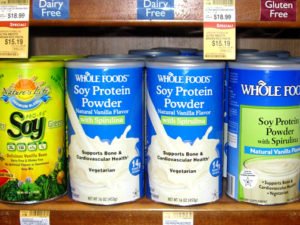 Good question, I am almost embarrassed that I neglected to cover it during my presentation, however given my allotted time and the supposedly short attention span of high school kids, I had to skip the topic of soy.  Good excuse?  Maybe not, but I tried.  Well worry not because I am going to discuss soy and through my research I will give you the good, the bad and the ugly and then you can make up your mind about whether soy is right for you.

Both times when the “What about soy?” question came up, I answered the same exact way; “What about soy?  How are you using it? As a whole food, as an ingredient in foods, as a cooking oil, as a milk alternative, as a supplement?”  Soy is abundant in our western diet and is found in everything from energy bars to baby formula.  One on the biggest reasons why it is so commonly used in the United States is that we have so much of it; in fact it shares the top spot with corn as our most farmed commodity.

“According to the US EPA; in 2000 approximately 2.8 billion bushels of soybeans were harvested from almost 73 million acres of cropland. The US production of soybeans accounts for over 50% of the world’s soybean production, 56% of the world’s oilseed production and $6.66 billion in soybean and product exports.”  That is a lot of soy.

I have said it before and I will say it again; Know your source when it comes to nutrition.  There are good forms of soy products primarily coming from the fermented variety including forms such as miso, tempeh, natto, and soy sauce.  Fermenting soy neutralizes the toxins found inside and releases many enzymes and healthy probiotics that aid in digestion and immune system function. Fermented soy has also showed to potentially have some cholesterol lowering effects.

With so much soybeans produced in the United States different forms of it are found in many foods that we consume and are also used as alternatives to more traditional foods like meat, dairy and protein sources.

Soy is not a good form of protein but the irony is that it is readily used in many products as the main protein source.  Pick up many health/protein bars and baby formula and you will see that one of the first ingredients is some source of soy.  According to the Weston Price Foundation; “like all legumes, soy beans are deficient in sulfur-containing amino acids methionine and cystine. In addition, modern processing denatures fragile lysine.”  Soy also lacks useable forms of Vitamin B12 and is very deficient in Vitamin D and calcium which are necessary for proper bone health.

All of the soy used in many popular products such as protein bars and baby formula are not of the more healthy fermented variety.  The main problem with unfermented soy is the processing used to make them consumable creates and inferior and potentially unsafe product. Soy contains phytic acid and the common unfermented soy varieties do not get rid of this acid.  Phytic acid had been associated with reduction of the assimilation of important vitamins such as: calcium, magnesium, copper, iron and zinc. With poor vitamin assimilation, high phytate diets have also been linked with growth problems in children.

When soy is processed, several toxic compounds are formed.  Toxins such as, lysinoalanine and highly carcinogenic nitrosamines, free glutamic acid (MSG), a potent neurotoxin, are added to many soy foods.

Soy phytoestrogens are potent antithyroid agents that cause hypothyroidism and may cause thyroid cancer.  In infants, consumption of soy formula has been linked to autoimmune thyroid disease.

If the potential dangers of unfermented soy have not scared you enough, much of the soy used in commercial products are genetically modified organisms called GMOs.  According to the website, Seeds of Deception, “GMOs is the result of a laboratory process of Genetic Modification (GM) by taking genes from one species and inserting them into another in an attempt to obtain a desired trait or characteristic; with genetic engineering, scientists can breach species barriers set up by nature.”  These GMO seeds are spliced and put together with different genes that would never be possible to complete in nature.

GMO seeds are usually produced to express two specific qualities, herbicide tolerance and the ability of the plant to produce its own pesticide.  If these seeds are resistant to potent pesticides, farmers can use them liberally without killing their crop.  According to Seed of Deception, 90% of the soy farmed is of the GMO variety.  When unnaturally trying to enhance or create a property foreign to the seed through genetic modification, several adverse traits are expressed as well.  “GMO plants create toxins, react to weather differently, contain too much or too little nutrients, become diseased or malfunction and die. When foreign genes are inserted, dormant genes may be activated or the functioning of genes altered, creating new or unknown proteins, or increasing or decreasing the output of existing proteins inside the plant.” 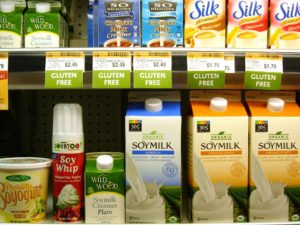 The likelihood of consuming GMO food is almost enviable and the potential risk factors are staggering.  Several studies have concluded the following:

GMOs may make you allergic to non-Genetically Modified foods

The biggest take home point is that when you are consuming soy, or any food for that matter, find the most natural sources available, make sure they are handled properly through traditional preparation methods, like fermentation, be aware of where your food is coming from and assume that when you go out to eat you are not getting the highest quality foods and if you are to use it at all, use in moderation.