My gym has somewhat of an “open-door policy;” I encourage trainees to bring people to train with us for a day. Some call this policy cruel because they usually leave feeling muscles they didn’t know existed. I get excited when people come in to try our training methods because I get to do the two things I enjoy most; learn and teach. Inflicting pain is just a pleasurable bonus to the experience.

No matter who strolls in through the door, I initially see it as an opportunity to learn. Who is this person? How do they train? How is their technique? What are their goals? What do they share with other trainees I have seen? How are their training methods different? After I have done my brief survey through casual conversations and some light training observations; I begin to think, “Is there anything I can do to help this person get more out of their training and achieve their goals in a more efficient way?”

I recently had an opportunity to do this with Stephen, a great guy with a passion for training. He came down for one of our Friday sessions which is generally a free-for-all structure consisting of circuits, strongman type training and odd object lifting.
I talked to him about his current training routine, reasons for training and his goals. Like many males I have talked to over the years, he was lifting to increase his strength and to create a desirable physique. His current plan consisted of doing a mix of free weights and machines while following guidelines others have told him and what he had read in popular magazines. I concluded that his overall strength training execution could use a little work in order for him to reach his goals.
Before I started to chime in about what I think he should do, I wanted to do two things;

I had my assumptions that his current leg work would most likely render his hips useless and unable to produce power for full body movements, and my assumption was correct. He was able to flip the tire but had trouble getting it started which showed signs of not being able to fire the hip muscles properly. In technical terms, Stephen’s technique produced a low rate of force development. The inability to get the 70lb keg overhead showed me his lack of muscular coordination as well as the absences of some technical lifting skills. 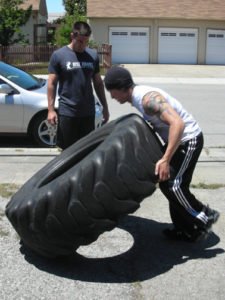 We know that there are several factors for strength, some of which include:

Both of his problems, most likely, stem from frequent use of machine exercises because they don’t allow him to stimulate the nervous system sufficiently for proper muscle activation and rate of force development. The machine’s fixed movement patterns and isolating nature do not allow maximal coordination the muscles need to complete full body lifts. 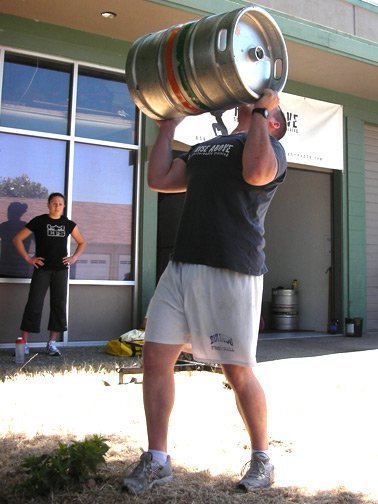 I could tell he was frustrated and eager to solve the problem so instead of overwhelming him with a ton of information and program design I decided to teach him only one principle to apply to two specific exercises.

The principle is simple; you have to create Tension. By simply activating, squeezing, tensing, firing (whatever you want to call it) every muscle, you can help your performance during any lift. I then showed him how to apply the tension principle towards two exercises I wanted him to add into his routine; the deadlift and military press. He learned how to tighten up his back and arms and drive with his hips.  Stephen’s deadlift became much stronger, especially at the beginning of the movement after using these techniques.  By tensing his abdominals, lats and glutes he was able to press weight overhead much easier. 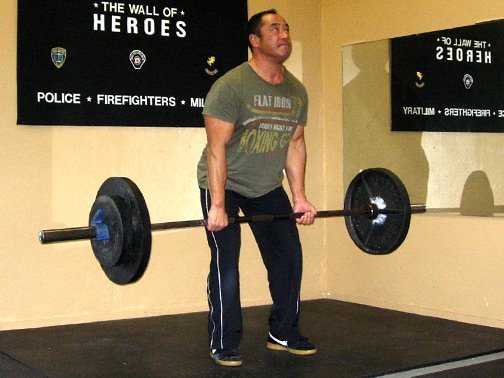 I had the chance to catch up with Stephen and get answers to a few questions to see if his new way of training has helped him progress in his strength training; here is what he had to say:

Rise Above: How were you lifting before?

Stephen: I was too concerned about gaining mass by isolating the muscle I was working on and not using any others with the use of machines.

RA: Why were you doing it that way? (i.e. a friend told you, own instinct, an article…)

St: I just picked the machines that worked the muscles I wanted and I watched others at the gym and tried to copy the ones I thought would be beneficial. I noticed I wasn’t progressing as rapidly as I had before which made me think about my technique and wondered if I was doing it correctly.

RA: How did the training session we had change your mind?

St: I realized for the first time that I should use my legs and engage my entire body when doing any exercise. By knowing this I could probably press the keg but couldn’t because I didn’t have enough leg strength to help me get it over my head; it was an real eye opener. Plus, not being able to flip the tire [effectively] etc…

RA: When you tried this new tension technique did you feel different, did it take time to learn, did you notice immediate results?

St: I noticed immediate results. I’ve applied this technique to all my exercises and I definitely have more power. I never realized how much power comes from your legs. I’m now more focused on form and keeping my body tight and my legs grounded and engaged. I have applied this technique to other exercises as well and especially noticed big improvements in my ability to bench, overhead press and deadlift. 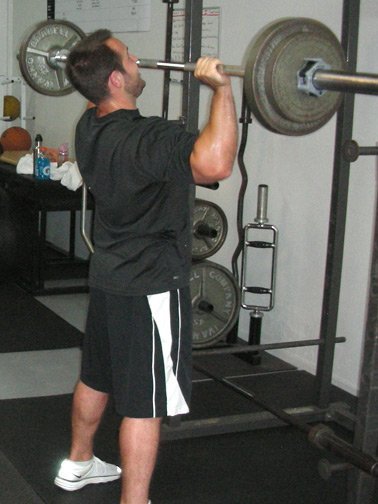 In the next part of this post I will go into greater explanation of tension and how to apply it successfully towards other strength training exercises.